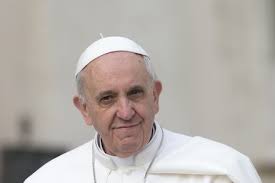 Blessed are the merciful, for they will receive mercy (Matthew 5:7).
What did you give up for Lent?  Candy?  Gossip?  Facebook?  Commendable choices, but Pope Francis calls us to get serious.
In his message for Lent 2015, Francis declared that oblivion of the haves for the have-nots has reached such epidemic proportions that “we can speak of a globalization of indifference.”  We must confront this “real temptation for Christians” during Lent.  How?

The love of God breaks through that fatal withdrawal into ourselves which is indifference. The Church offers us this love of God by her teaching and especially by her witness. But we can only bear witness to what we ourselves have experienced. Christians are those who let God clothe them with goodness and mercy, with Christ, so as to become, like Christ, servants of God and others. This is clearly seen in the liturgy of Holy Thursday, with its rite of the washing of feet. Peter did not want Jesus to wash his feet, but he came to realize that Jesus does not wish to be just an example of how we should wash one another’s feet. Only those who have first allowed Jesus to wash their own feet can then offer this service to others. Only they have “a part” with him (Jn 13:8) and thus can serve others.[1]

Read the Fifth Beatitude in reverse: “Receive mercy, and you will be merciful.” That’s how the Pope interprets Jesus’ point above: To break through the shell of indifference, humble yourself and receive mercy.  Then your mercy will flow, and you will embody the Beatitudes.  Francis continues:

[T]he suffering of others is a call to conversion, since their need reminds me of the uncertainty of my own life and my dependence on God and my brothers and sisters. If we humbly implore God’s grace and accept our own limitations, we will trust in the infinite possibilities which God’s love holds out to us. We will also be able to resist the diabolical temptation of thinking that by our own efforts we can save the world and ourselves.

The Pope then calls the converted to move forward with purpose:

Her mission is to bear patient witness to the One who desires to draw all creation and every man and woman to the Father. Her mission is to bring to all a love which cannot remain silent. The Church follows Jesus Christ along the paths that lead to every man and woman, to the very ends of the earth (cf. Acts 1:8). In each of our neighbours, then, we must see a brother or sister for whom Christ died and rose again.

If you read these words with approval, asking you to give up indifference for Lent may seem like asking a vegetarian to give up bacon.  But if you are like me, you can find the seeds of indifference within when the comforts of life lull you into moral complacency or when you are hungry, angry, lonely, and tired.  Giving up those bad seeds for Lent can help the Pope kick-start a movement, the same one Jesus started two millennia ago.


[1] All quotations from Pope Francis, “Message of His Holiness Pope Francis for Lent 2015,” at http://w2.vatican.va/content/francesco/en/messages/lent/documents/papa-francesco_20141004_messaggio-quaresima2015.html.  See John 13:1-8 for the story of Jesus washing the disciples’ feet.

This post was originally published February 23, 2015 and is being republished to celebrate the Pope’s visit to the US.