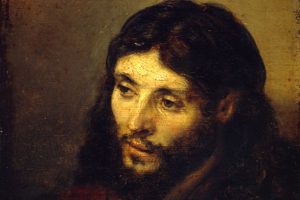 Blessed are those who mourn, for they will be comforted (Matthew 5:4).
In the upper room before his arrest, Jesus prepared the disciples for the perils and joys to come. Noting their sorrow in anticipation of his death, he offered this consolation: His own Holy Spirit, his very power and life will remain, empowering and guiding them (John 16:6-7).
Surely somebody wanted to protest, “But then we won’t see your face!”
I know how they longed to keep his face ever before them. Seventeen years ago my infant son studied my face and grabbed my nose. Recently, my lovely wife returned from several days and several hundred miles away for work, and we gazed long into each other’s eyes at a restaurant and smiled. A half century ago, I glanced at my mother’s face as she talked on the phone, and I realized I could not fathom the world without her.
Even after his resurrection appearance, the countdown began to Jesus’ ascension when they had somehow to make sense of a world without his face.
When the camera pans a football stadium filled with 100,000 faces, they look like specks to mortals like us. God sees each one with motherly love.
Every snotty-nosed, sunburned, blue-eyed boy with dusty cheeks, every great-grandmother with dementia in the nursing home staring blankly at ceiling tiles, every keyed-up dealer on Wall Street has a face that quickens the heart of someone, that brings tears to the eyes of someone, or did once.
The eye is the window to the soul, they say, which explains why we cannot gaze into each other’s eyes too long. It gets dangerously close to gazing into the eyes of God, the imago dei in each of us. Mortals like us carry that image, knowing in some inarticulate way that we want to see that face but fear that it will kill us.
When Mary encountered Jesus Easter morning, she mistook him for the gardener. When two disciples encountered him a little later on the road to Emmaus, they fancied him an odd but brilliant stranger. They failed to recognize him at first because who, after all, can imagine or anticipate resurrection? They failed to recognize him because they settled in to the absence of his face.
Suppose a disciple spoke for us and protested to Jesus’ promise of a Spirit unseen like the wind, “But then we won’t see your face!” Jesus might answer, “Look around. Look into each other’s eyes. Find especially the ones with tears, the tired and hungry ones, the ones that make you ache for seeing them wait for God-knows-what, spending their last shred of hope. Look at the least of these, and for God’s sake give them a drink of water, a blanket, a hand, and then look some more. There. Take comfort. See my face.”