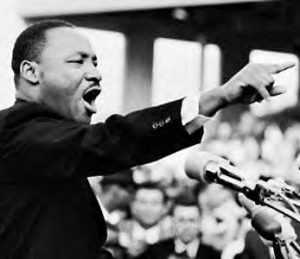 Blessed are those who mourn, for they will be comforted (Matthew 5:4).
My childhood memories of Dr. Martin Luther King, Jr. on the news leave the impression of a man of iron will, his jaw set in the face of detractors, his eyes flashing with controlled fury, his voice like rolling thunder. Having read his autobiography, heard many of his speeches and sermons, and seen the movie, Selma, that image softened.
Fear, self-doubt, and temptations to retreat visited him. He needed assurance in private moments with God, family, and friends.
In “Antidotes for Fear,” King offers good pastoral advice: Face the fear. Don’t repress it or run from it. That only begets fear of fear itself, “phobiaphobia,” which really throws things out of control. Allow it, name it, and explore it. The irrational components often dissolve in the light of day. Meanwhile, he advocated respect for fear’s rational elements, reminding us that fear serves positive purposes, motivating innovation and keeping us focused.[1]
As a public figure called to inspire and lead, he needed to manage his fears skillfully. While he offers guidance on marshaling personal resources for facing fear, he includes in “Antidotes for Fear” a story of help he received from a fellow Christian, Mother Pollard. An elderly woman in Montgomery who walked to work daily during the bus boycott, she impressed King as “amazingly intelligent and…understanding of the meaning of the movement.” He continued:

On a particular Monday evening, following a tension-packed week which included being arrested and receiving numerous threatening telephone calls, I spoke at a mass meeting. I attempted to convey an overt impression of strength and courage, although I was inwardly depressed and fear-stricken. At the end of the meeting, Mother Pollard came to the front of the church and said, “Come here, son.” I immediately went to her and hugged her affectionately. “Something is wrong with you,” she said. “You didn’t talk strong tonight.” Seeking further to disguise my fears, I retorted, “Oh no, Mother Pollard, nothing is wrong. I am feeling as fine as ever.” But her insight was discerning. “Now you can’t fool me,” she said. “I knows something is wrong. Is it that we ain’t doing things to please you? Or is it that the white folks is bothering you?” Before I could respond, she looked directly into my eyes and said, “I don told you we is with you all the way.” Then her face became radiant and she said in words of quiet certainty, “But even if we ain’t with you, God’s gonna take care of you.”[2]