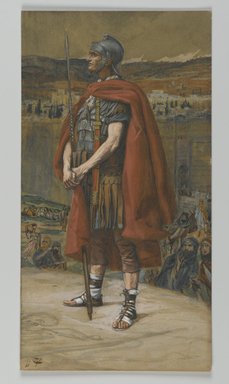 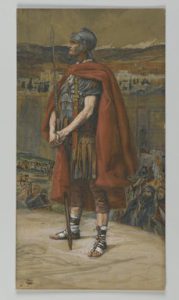 Ask this imposing centurion about the messianic secret.

As Mark tells it, Jesus moves fast through his ministry. Healing a leper here, fending off Pharisees there, teaching about God’s emerging and mysterious kingdom here, shining like the sun with Moses and Elijah on the mountaintop over there. He seems like a man running to keep ahead of the buzz.

Intermittently, before darting from one wonder to the next, he tells the healed and amazed not to tell. Keep this wonder a secret. As with so many of his commandments, the spirit is willing, but the flesh is weak. Nobody can obey that order on their own power. Nobody can keep silent about such miracles.

And why keep it secret anyway? Why have disciples, why teach, why interrupt the natural order if not to broadcast a word from God? Is this not good news? Is good news not for telling?

Well, to tell about the wonders will inevitably raise the question whether he is the Messiah. This is a messianic secret. Among occupied people who nevertheless live and die by the promise that theirs is the one, true God and theirs the highest calling, the possibility that God’s Son arrived to set things straight can ignite an explosion of pent-up hope.

Perhaps Jesus wants to keep the explosion at bay until he can get a few things done. Perhaps he wants to deflect attention himself to the God who sent him. Or perhaps he just wants to stay out of trouble.

No, he reveals why he pled for the messianic secret at the climax at the story, at the cross, amid the din of jeering onlookers and the silence of betrayers, beneath the gathering darkness and surrounded by traumatized witnesses. Rome himself, a centurion holding a hammer with blood on his hands, looks up at the writhing, bleeding, naked man and breaks the news:

killing the troublemaker. But God, the doomed Nazarene’s, “Abba,” prompted the centurion to bear the first unbridled witness. This unlikely character proved the first to tell the simple truth not in a huddle with the disciples as Peter had, but in the dangerous open space of Calvary.

This theophany defies all reason. Generations before, Isaiah had a sense for it when he sang of the anticipated servant of God,

Just as there were many who were astonished at him

—so marred was his appearance, beyond human semblance,

and his form beyond that of mortals—

so he shall startle many nations;

kings shall shut their mouths because of him;

for that which had not been told them they shall see,

and that which they had not heard they shall contemplate (Isaiah

But who can deduce that through such horrible suffering we recognize the one who answers all our hopes?

That theophanic drama continues. The Spirit converted St. Francis by leading him to embrace and kiss a leper. Mother Teresa bore witness to Christ’s presence among the poorest of the poor in Calcutta. And those who face seemingly hopeless suffering of their own or of those for whom they care catch intimations of this most elusive of wonders.

Easter means Christ lives in us and among us, loving us and leading us, calling us to join him in preparing a fallen world for a coming kingdom of God. But Good Friday means that Christ still dies among us, redeeming us with his blood. For those who follow him, not only the life but the death awakens us every day to who he is.