Building the Bridge Across Loneliness 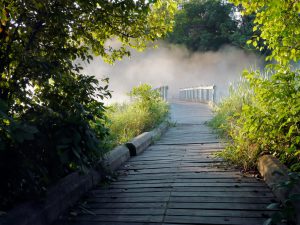 Blessed are the peacemakers, for they will be called children of God (Matthew 5:9).
As you may recall from the post, “Crisis Telephone Contemplation,” I experienced at a tender age the power of listening. Distressed people seemed to collect themselves and find new energy and direction just by talking with me despite getting no advice.  That has important implications for peacemaking.
Knowing little about life, I could do at least this: Listen to feelings and let people know I heard them. Young and old, rich and poor, healthy and sick, citizen and stranger all share the common ground of emotions.  When we disagree on how to live, what to do next, or what matters, we can at least claim our feelings and honor them in others.  Recognizing and respecting emotions in ourselves and others builds bridges between hearts, and building bridges makes peace.
Now you might ask, “How could you do that as a kid when a suicidal person called and your deepest depression was homesickness at summer camp?” Granted, it would be a mistake to say to the severely depressed, “I know exactly how you feel.”  In fact, it is a mistake to say that to anyone.  No one can know exactly how another person feels, and respecting others’ feelings requires honoring the uniqueness of their experience.
But even as a kid, I knew enough of sadness, fear, and despair in my relatively innocent and sheltered life to tune in and name the feelings I heard from the caller. Naming them aloud as a fellow sufferer, even if I never suffered as much, built the bridge across loneliness.  That’s what every hurting person wants.  It is peace itself.
In posts like, “Privilege and the Compassion Deficit,” and, “A Comparison Game,” I expressed concern about discounting or dismissing our own emotional pain in deference to those who suffer more, for that might cut off the oxygen supply to compassion. If I don’t respect my feelings, I will eventually grow numb to the feelings of others, even resenting them.  Suffering is not a competitive sport.  It is a cooperative challenge.  We suffer most meaningfully when we recognize and salute those who suffer similarly.
In our world of no whining zones, respecting feelings is countercultural and prophetic. Furthermore, dualistic thinking that opposes emotion to reason only makes us unreasonable.  Even reason’s standard-bearer, Aristotle, honored feelings as elements of virtue and depicted rational behavior as wisely responsive to feelings rather than suppressing or dismissing them as mental flatulence.
When you fight or suppress your emotions, you throw gasoline on them, and they consume you like fire. But when you welcome them, even the painful ones, they become your teachers, alerting you to many-hued threads woven in your days.  Fully awake, you may join knowingly in God’s peacemaking project, for upon naming and claiming the feelings you share with strangers, you possess raw material for bridges.  With God’s help, anyone can build them, even a kid.