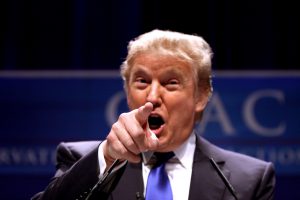 Blessed are the meek for they will inherit the earth (Matthew 5:5).
I do not know who Donald Trump is. Most who think they do probably don’t. Who knows whether Trump himself does?
We know only an image of a perpetual showman swaggering from casino to ringside seat to reality show where he lustily fires aspiring managers for his empire when they fail to follow the rules of the jungle. Now this persona takes to the presidential campaign stump, spraying expletives and bigoted blathering to the delight and approval of a sizable minority of the Republican Party.
Last fall, I attended the annual meeting for college counseling center directors in Chicago, and some of us went to the Art Institute of Chicago for our afternoon to play. En route a skyscraper with TRUMP plastered in giant letters across the glass loomed before our shuttle. Predictably, the busload of therapists launched into spirited discussion of narcissism.
Because of his millions, we grant Trump license to broadcast himself. Not that we like his grandiose caricature, or more precisely, not that we admit that we do. I classify the sound of his voice with fingernails on the chalkboard, the sight of his puckered glower and red dome of hair with an oil spill. But that says more about me than it says about The Donald, whoever he is.
Carl Jung surmised that we find those persons most obnoxious who exhibit qualities we despise in ourselves. Deep within resides an exiled alter ego who believes the only hope is to accumulate as much wealth, seek as much pleasure, exercise as much power, and exalt myself as much as possible in the eyes of others. Then die. This shadow side prefers that desperate game with clear objectives and rules to one relinquishing ultimate control to an unmanageable but loving God who offers eternal purpose and joy on unimaginable terms.
The persona of Donald Trump reflects a side of me that prefers for God to stay on the sidelines and let me play by my rules. Yet, that shadow side is not the real me. I want a life grounded and surrendered, not trapped on a treadmill of building and promoting myself, but free from myself, free to love. That’s the pattern of life Christ lived and bid us follow, a meek way.
Too often I look more like a poor version of The Donald. Meanwhile, I don’t know the real Donald Trump. For all I know, he volunteers in soup kitchens incognito. But I suspect that God sees me for who I really am, just as God sees Donald Trump for who he truly is, beloved, blessed, invited home.

Photo of Donald Trump speaking at CPAC 2011 in Washington, D.C. by Gage Skidmore. See Photo By Gage Skidmore via http://public-domain.pictures/