From Salt Lake City, With Love 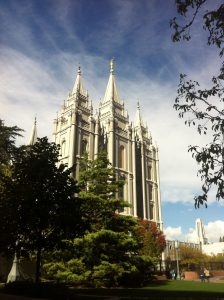 Blessed are those who are persecuted for righteousness’ sake, for theirs is the kingdom of heaven (Matthew 5:10).
Greetings from Salt Lake City, Utah, the city with a big lake you can float on, beautiful mountains nearby, and Mormons. Here for a counseling center directors’ conference, I stand on their holy ground.
I know just enough about the Church of Jesus Christ of Latter Day Saints (LDS) to be dangerous.  If you are a Mormon reader, I write to pass on how I came to appreciate you.  But first I must share doubts I had to overcome, learned or ignorant.  Bear with me.
From what I’ve gathered in conversations with Mormon friends and missionaries as well as occasional study, standard Mormon beliefs seem, well, a bit out there to me.
For example, God is a married guy in heaven, and Native Americans are a lost tribe of Israel.  The religion’s little educated founder, Joseph Smith, claimed that an angel led him to a third book of scripture, Book of Mormon, buried in a hill in New York state, and with a little help and misadventure, he translated the “reformed Egyptian” text.  He gave the original back to the angel then promptly published the translation in 1830.  God reportedly told Smith all other churches completely missed the mark and charged him to lead the new latter-day saints.
Smith also advocated and practiced polygamy, which eventually got him jailed and killed in state supported mob violence.  Until they renounced polygamy in the late 19th century, Mormons suffered harassment for it and stood to lose land and rights if they did not change.
That is persecution, but not likely for righteousness’ sake.  Polygamy exploits women and makes idiots of men (as it did Smith and his brethren).  But before that, Mormons suffered persecution for their opposition to slavery and for their friendliness with Native Americans, righteous stands in an unrighteous culture.
Welcomed nowhere, they migrated far from society to present day Salt Lake City under the leadership of a Joshua figure named Brigham Young. Ironically, the world came to Salt Lake City soon thereafter as it became an important outpost for western expansion.
As wacky as Mormon history and theology may sound to outsiders like me, no denomination lacks dubious ideas and moments.  I’m a Presbyterian.  Ever heard of double predestination?  Sigh.
Moreover, Salt Lake City this week is not only hosting counseling center directors but the Parliament of World Religions, to which a friend helped me get a sneak peek this week.  Between the two conferences, I have experienced warm, caring Mormon leadership in teaching self-care, witnessed Mormons standing against their majority for LGBT respect and inclusion, and another advocating radical forgiveness of self and others.
Mormons suffer the same schisms and moral inconsistencies as the rest of us (including mistreatment of Native Americans and prejudice against African-Americans they had to overcome even after their early good will).  Like everyone else, they still have a long way to go.  If their founders were cracked pots, well, the Bible and religious history record many deliveries of divine treasure in cracked pots.  Moreover, God heard Mormon prayers through their persecutions whether they were right or wrong, and God will continue to work with and through them for the good.  That’s what God does.  Mormons are no less witnesses to that than the rest of us.


In addition to my memory from conversations and study long past, primary sources upon which I relied for this piece included Patrick N. Allitt’s Great Courses lecture, “Oneida and the Mormons,” from the Teaching Company.   Also, I checked Wikipedia’s article on The Book of Mormon.