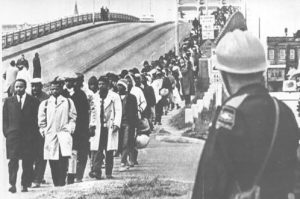 Great leaders of nonviolent resistance and forgiveness like Gandhi, King, and Tutu proclaim seamless continuity between inner peace and social justice. No personal pain bears on social responsibility like fear. MLK’s followers inspire awe with their willingness to move through fear and face billy clubs, jail, and even violent death. In a sermon, their bold leader offered, “Antidotes to Fear.”[1]
Of his four antidotes — awareness, courage, love, and faith – we will discuss in this post the love at the heart of this Beatitude. King preached:

Fear is mastered through love.

The New Testament affirms, “There is no fear in love; but perfect love casteth out fear.” The kind of love which led Christ to a cross and kept Paul unembittered amid the angry torrents of persecution is not soft, anemic, and sentimental. Such love confronts evil without flinching and shows in our popular parlance an infinite capacity “to take it.” Such love overcomes the world even from a rough-hewn cross against the skyline.[2]

From his era of Selma to ours of Ferguson, his era of Cold War to ours of terrorism, his era of riots to ours of school shootings, fears only multiply. Many seek protection from “the bad guys” in walls and guns. But King saw fear as the root of violence and overcoming fear as imperative:

Were a nightmarish nuclear war to engulf our world, the cause would not be so much that one nation hated the other, but that both nations feared each other…The nations have believed that greater armaments will cast out fear. But alas! they have produced greater fear…Not arms, but love, understanding, and organized goodwill can cast out fear.[3]

As promised, he takes it to the personal level:

This truth is not without a bearing on our personal anxieties. We are afraid of the superiority of other people, of failure, and of the scorn or disapproval of those whose opinions we most value. Envy, jealousy, a lack of self-confidence, a feeling of insecurity, and a haunting sense of inferiority are all rooted in fear…Is there a cure…? Yes, a deep and abiding commitment to the way of love. “Perfect love casteth out fear.”

Political and personal “realism” scoffs at making oneself vulnerable by loving in a world full of “bad guys.” Such errant common sense will feed the fears sustaining cycles of social violence and personal misery. A life obsessed with power and force revolves around fear. Yet, many pastors, pious politicians, and their flocks present this fear-centered life as the Christian way when it is diametrically opposed to the way of Christ.
When Jesus blessed those persecuted in his name, he blessed those who defy the culture of fear with a culture of courage to love at the risk of suffering. He said take up my cross and follow me, not take up your guns and follow me. Blessed are those who stake their lives on love, for that is the way toward  overcoming fear.