Constantine, the Kingdom, and You 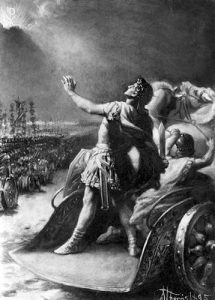 Constantine before the Battle of Milvian Bridge

Blessed are you when people revile you and persecute you and utter all kinds of evil against you falsely on my account. Rejoice and be glad, for your reward is great in heaven, for in the same way they persecuted the prophets who were before you (Matthew 5:11-12).
The fourth century A.D. marked possibly the greatest cultural and religious revolution in western history. At its beginning, Roman rulers tortured and killed Christians mercilessly. Soon the emperor Constantine converted to Christianity because a vision convinced him the Christian God delivered victory at the Battle of Milvian Bridge. By the end of the century, Christianity was the imperial religion.
What does this have to do with us? Everything. Since then the religion of power made perfect in weakness became the religion of an empire determined to make power perfect in might. If the centurion recognized Jesus as God’s Son in crucifixion, Constantine recognized him as his leader in victory. We live that contradiction to this day.
While Jesus taught that the first will be last and the last, first, we still live in the empire’s hierarchy in which the first are first and the last, last. That system kept things in graceless order then as it does still. It also maintains the very injustices and hierarchical hypocrisies Jesus deplored.
It’s complicated. Surely the accommodation of the kingdom of heaven to the powers of the world grieves God. But so did the torment and persecution of Jesus’ followers that ended at Milvian Bridge.
What a relief that we do not face degrading deaths in the jaws of beasts in Roman arenas! Yet, to those who hunger and thirst for right relationship with God, who discipline themselves for single-minded devotion, the persecution continues quietly. For neither blood nor terror mark the essence of persecution. Exclusion does.
If you heed Christ’s call, you find your deepest truth in love for him and your voice in the ways you feed his sheep and glorify him with your gifts, however grand or humble. And if you find yourself not fitting in, slighted or categorized or kept at arm’s length for speaking your truth and living your calling, this Beatitude blesses you.
In her comment on my last post, “Crossing a Line for Love,” Annette Hilburn, wrote, “The walk is easy but others would have me think it far-fetched and troubled.” She obviously gets it.
Living the Christian life in post-Constantinian culture does not entail trying to find every way you can to look different. But if you keep your eyes on Christ, you will seem at least a little weird to the majority who live more in the empire of Constantine than in the kingdom of God. Paul had that in mind when he wrote,

“Do not be conformed to this world, but be transformed by the renewing of your minds, so that you may discern what is the will of God—what is good and acceptable and perfect” (Romans 12:2).

The Hebrew term for “blessed,” ashre, also means, “on the right track.” If your love for Christ makes you somewhat odd and lonely, you just might be getting it right.