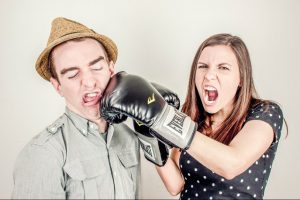 Blessed are the merciful, for they will receive mercy (Matthew 5:7).
Uncivil political discourse dampens national morale and poisons our mental health. The very leaders we turn to for inspiration feed us a toxic diet of character assaults and fear. They sicken us then pose as doctors with the cure.
For me, nausea rises when politicians use piety to sugar coat and promote an agenda that would make Jesus weep or overturn the tables and drive out the money changers. The fourth of the Ten Commandments reads: “You shall not make wrongful use of the name of the Lord

your God” (Exodus 20:7a). In other words, do not use God’s name to promote your own interests like winning votes or distracting others from your cynical tactics.
Don’t get me wrong: Politicians must speak of faith lest they wear their masks too tightly. But candidates too often give a strategic nod to piety and then promote merciless agendas.
For example, some say never mind that corporations that get huge tax breaks and government subsidies woo undocumented Mexicans to do work that Americans don’t want to do. Let’s blame the aliens, rough them up, and send them home for taking jobs here.
Or some say never mind that many Americans cannot work or do so in survival mode because of inadequate health care. Let’s fight for the individual’s right to withhold money from the insurance pool that could build up the common good.
Such politicians cover their lack of mercy with appeals to a kind of triumphalism, implying that those who win God’s favor don’t have such problems and need an advocate in power to fight off reprobate leeches. Jesus condemned that attitude (e.g., Luke 13:1-5).
In the politically tumultuous Vietnam War era, Henri Nouwen and a group of pastoral theologians visited Senator and former Vice-President Hubert Humphrey.  They asked him about compassion in politics:

The Senator…was visibly caught off guard…But then, after having adapted himself to the somewhat unusual situation, Senator Humphrey walked back to his desk, picked up a long pencil with a small eraser at its end, and said in his famous high-pitched voice: “Gentlemen, look at this pencil.  Just as the eraser is only a very small part of this pencil and is used only when you make a mistake, so compassion is only called upon when things get out of hand.  The main part of life is competition; only the eraser is compassion.  It is sad to say, gentlemen, but in politics compassion is just part of the competition.”[1]

That is the way of the world. But Jesus told a worldly leader, “My kingdom is not from this world.” (John 18:36a).
A genuinely Christian perspective on political activity engages worldly problems because people suffer. But we reject the story line that power and competition define us. We live the story of God’s mercy for us and God’s invitation to participate through mercy for others.
There are no random acts of kindness. Kindness seems random when we believe “the main part of life is competition; only the eraser is compassion.” No, the sideshow is the nasty political campaign the media feeds us 24/7. Your merciful deeds today are where the action is.