Grace for Insiders and Outsiders 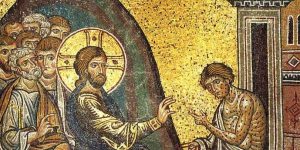 Outsiders like lepers became insiders when Jesus healed them.

Blessed are the poor in spirit, for theirs is the kingdom of heaven (Matthew 5:3).
Imagine life with no knowledge of germs, viruses, bacteria, or other microscopic beasts that make you sick. Whatever the cause, it’s invisible, but you can’t imagine that anything that wreaks such havoc could be too small to see.
It makes more sense to think you are too small or limited to see the likeliest known culprit: An evil spirit. Such spirits also made Aunt Liz starve herself and Cousin Joel steal your slingshot when he already had three.
So when the blacksmith’s skin breaks out in hideous sores that only spread, it belies the real evil within, his friendly demeanor notwithstanding. Since evil spirits seek to inhabit anyone who comes near, the blacksmith must move to the hinterlands for the sake of the children, if nothing else.
So the blacksmith joins a colony of lepers far from town. These outsiders include a few farmers, a defrocked rabbi, a widow, some estranged wives, and most interestingly, a Samaritan. Born to a race deemed third-rate Jewish wannabes, only by the grace of the Jewish outcasts could the Samaritan join them.
Their grace springs more from common fate than from the religion that condemns them. But word gets around when rabbis get radical, and rumor had it that Jesus of Nazareth not only welcomed outsiders, he showed a peculiar preference for them. Moreover, he made a lame woman walk, an epileptic boy quake no more, and a dead girl dance again.
They even heard a story about restoring a naked Gerasene madman to sanity by driving the demons into a herd of pigs. The squealing swine stampeded off a cliff. Let the Pharisees wring their hands over how such a reckless violator of purity laws seemed to have the demons by the neck. These 10 lepers would hail him in a heartbeat if he ever passed within shouting distance.
He did. They shouted. He met them face to face and strangely enough, told all of them, even the Samaritan, to behave as good Jews and go report their cleansing to the priests. They started walking and soon enough their skin cleared up. They skipped and whirled and sang on their way to the nearest synagogue. With their skin back, no one could curse them now.
But the Samaritan, the double outcast, ran back to Jesus, prostrated himself, and tearfully thanked him. Jesus returned the honor by telling him explicitly what the healing implied: “Your faith has made you well.” Until then, claim to have any valid faith at all seemed impossible for him.
Jesus asked rhetorically why only “this foreigner” returned to thank him. He knew why. Those who have no claim to anything feel more grateful for everything. That gives outsiders a spiritual advantage over insiders.
But Jesus came for the insiders too. Love, not exclusion, purifies. Opening his arms to the world, he showed Israel how to be Israel. And the church how to be the church. For that is how chosen ones meet the God who blessed them in the first place.
See Luke 17:11-19.

Question for Reflection and Comment: When have you felt like an outsider? How did you respond to Jesus?