Wild Goose Festival 2016: Mourning and Dancing by the River 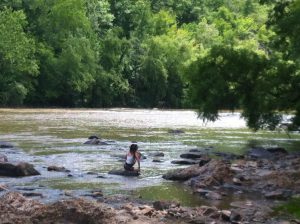 “That river flows the wrong way,” my wife, Wanda, said at first sight of the French Broad River two years ago.
We stood on the grounds of the Wild Goose Festival in Hot Springs, NC, a gathering of Christians and seekers who share a common passion for social justice, prayer, and witness that too often don’t fit in deformed vessels of institutional religion. How fitting to gather on the banks of a river that flows north when almost all the rest flow south.
But Wanda will quickly admit that she misspoke. Rivers don’t run the wrong way. The right way is however they run. For rivers rest into the topography, and that resting keeps them strong and steady in their march.
One of the world’s oldest rivers, the French Broad welcomed the mountains as they emerged eons ago. We polluted it, but we helped it come back. Now it marches wide and brown like rocky road ice cream making white marshmallow caps on the scattered rocks. It makes me smile as rocky road ice cream does.
It makes me smile not only with a child’s delight in ice cream but in Sabbath delight that sacred spaces bring. Natural anomalies often mark sacred spaces. A rainbow spans enemy camps. A cloud leads a refugee nation through the wilderness. A star illumines a manger. A river runs north.
At the Wild Goose Festival, we celebrate. But we do so with open hearts.
We do not censor tears. We invite mourning with all its anger and sadness. We allow all the joyous overwhelming of mountain views and the anguished overwhelming of the news.
In the heart of the Smokies, we get lousy telecom signals and broken internet connections. So this year, we heard mostly from the main stage about the terrible shooting of brothers of color in Louisiana and Minnesota and the terrible shooting of brothers in blue in Dallas. And we who don’t know what to do turned to God and one another in our search. As Amy Ray of the Indigo Girls said from the main stage Saturday night, “People, we gotta do more.”
One thing we must do about it is worship the one God whose grief encompasses and exceeds all human pain over such violence. So we worship the one God whose passion is for our peace because God loves us all.
Phil Madeira helped us with that as he sang these words on Saturday night:

And the next morning at closing worship for the Wild Goose Festival, we shared God’s passion as many joined a processional with Ken Medema leading our song, “Sometimes I Feel Like a Motherless Child.” The marchers followed the French Broad mourning and returned dancing to, “When the Saints Go Marching In.”
So long ago, the psalmist also sang:

There is a river whose streams make glad the city of God,
the holy habitation of the Most High.
God is in the midst of the city; it shall not be moved;
God will help it when the morning dawns.
The nations are in an uproar, the kingdoms totter;
he utters his voice, the earth melts.
The Lord of hosts is with us;
the God of Jacob is our refuge (Psalm 46:4-7).

As of that time and as of now, Jerusalem has no rivers. Yet, a river does flow from there into all the world. An anomalous river.  It is faith, hope, and love resting into God’s creation, moving from mourning to dancing. And it will flow until all creation is a sacred space and all the religions and nations embrace. Until all heed the cry of the one suffering, loving LORD:

[1] Read more: Mercyland: Hymns For The Rest Of Us – Give God The Blues Lyrics | MetroLyrics
Related posts