My Most Prized Possession 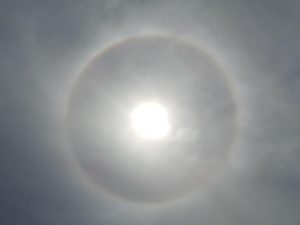 With prized possession in hand, this was my view from the bottom.

In my darkest hour, I claimed the treasure that bathes my life in Light. This prized possession brings me happiness greater than I knew possible.

Like you, I spent my younger years collecting treasures. Some were given to me, others found by happenstance, and others still earned in the games people play. Good health, sports awards, marriage, a doctorate, professional position, publications, a son, a house, and more, all came my way. They filled my treasure chest.

Then Failure visited, disguised in the purest white of Virtue.

She promised to stay a fortnight but remained for years, never washing, getting dingy, stinking, robbing me blind. I found myself in a sailing vessel at sea, stalled in the doldrums, my treasures floating about me, and as I paddled madly to retrieve them, drunken Failure laughed in the stern, flinging them overboard, and they soon sank or rode a riptide.

Arms to hold me, money in the bank, a respected name – all lost. Then Failure spoiled her joke and let slip that my treasure chest rested at the bottom. Now reduced to foolish desperation, I dove, heedless that I just saw everything disperse and vanish in the waves. Almost crushed by water pressure, I spied the chest with the aid of a mischievous sliver of Light that descended with me. I flung the chest open and found that it held one treasure — and that the only one I needed.

The chest was empty. Nothing. I found my poverty, my most prized possession.

With no time to think, I faced a decision: Close myself in the chest or let the lightness of poverty ever so slowly carry me back up.   I chose the latter. The mischievous Light gathered about me, a dazzling white, and I arrived back at the boat alone. Failure had vanished in my absence, but a gentle Wind arrived in her stead. I sailed back in solitude.

As mysteriously as Failure disappeared at sea, treasures slowly appeared on land: New means, new name, new companions. My labors no longer seemed in vain. Others welcomed my love until I dared fall in love again.

Treasures multiplied, but I hold them differently now. I savor them, not because they once were lost and now are found, but because they have a companion, the one true treasure without which all the rest lose value like withering flowers. With this companion, every treasure is gold indeed.

It is the emptiness of the chest, my poverty. Now I receive every treasure as a gift of love as long as I guard poverty as my most prized possession. When other treasures drift away, I bid them adieu and cling to the emptiness.

Many things come to me now. But every day in my prayers, I remember the treasure chest and return to it. I let it lay. I keep it empty.