Diamond at the Heart of Poverty 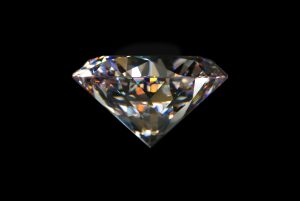 You own a diamond if you claim nothing.

Let’s not kid ourselves about poverty.

The dread of falling into it makes perfect sense. Those who do must slog out of the mire of survival mode against the resistance of victim-blamers. I will not romanticize or recommend it.
For Jesus certainly did not. Quoting Isaiah, he claimed in his mission statement that he “came to bring good news to the poor…to proclaim release to the captives and recovery of sight to the blind, to let the oppressed go free…” (Luke 4:18). God does not want poverty for anyone, and anyone who signs on to discipleship joins Jesus in efforts to free people from it.

But Jesus also shows us a blessed side of poverty.

Luke’s version of the first Beatitude reads simply, “Blessed are you who are poor, for yours is the kingdom of God” (Luke 6:20). Then Luke tells much about Jesus’ preference for the poor widow who gives what little she has and the poor beggar outside the rich man’s gate (Luke 21:1-4 and 16:19-31). His refrain that the first shall be last and the last first applies as much to financial status as any other.
But later, Constantine’s conversion catapulted Christians from the bottom to the top. Then more devout Christians embraced poverty as a means to holiness against the temptations of wealth and power. St. Anthony spent 20 years in the desert fighting the demons of temptation with prayer. St. Francis of Assisi handed over everything, clothes and all, to his indignant, wealthy father. Francis became our icon of Christian joy.
In the 20th Century, Charles de Foucauld, Dorothy Day, and Mother Teresa among others embraced poverty of spirit while fighting poverty’s miseries. For they becoming poor themselves while offering hospitality. Not everyone can have or give this spiritual gift

There is a diamond at the heart of that poverty.

Anyone can have and hold it who knows they own nothing anyway, only resources God gives for giving back. Thomas Merton, another 20th century giant of faith who embraced voluntary poverty, describes that diamond:

At the center of our being is a point of nothingness which is untouched by sin and by illusion, a point of pure truth, a point or spark which belongs entirely to God, which is never at our disposal, from which God disposes of our lives, which is inaccessible to the fantasies of our own mind or the brutalities of our own will. This little point of nothingness and of absolute poverty is the pure glory of God in us. It is so to speak His name written in us, as our poverty, as our indigence, as our dependence, as our sonship. It is like a pure diamond, blazing with the invisible light of heaven. It is in everybody, and if we could see it we would see these billions of points of light coming together in the face and blaze of a sun that would make all the darkness and cruelty of life vanish completely … I have no program for this seeing. It is only given. But the gate of heaven is everywhere.[1]

My Most Prized Possession
Constantine, the Kingdom, and You
Gratitude First
Lose Yourself to Love Yourself