The Prodigal Next Door 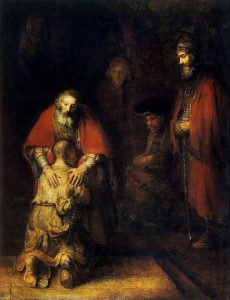 “Return of the Prodigal Son” by Rembrandt

The Prodigal in the Crowd

If you did not know Sam and saw him on the street, you would assume he had it all together: 401K, stable marriage, kids in college, and a respectable career. He dresses for success but doesn’t overdo it. He waves at a friend.

Sam sees himself differently. He waves at someone who would turn from him in disgust if he really knew him. In the mirror, he sees a gaunt, homely fellow no woman would want. At work, he gives a slice of his potential, at a loss over what do with the rest.

His kids slip away as time passes. Divorced twice, he cannot quite be himself with the woman he dates, who tells him he’s fine as he is. “Yeah, right. If she only knew, my portfolio,” he thinks and smiles over his pain, afraid to lose her if he doesn’t.

Sam has lived here almost fifteen years. But he feels like an alien. Constantly, he walks on the edge of utter isolation.

Sam lives a clean life, goes to church, and works hard. While he makes good money on his current job, he had other things in mind. He lost the job he came here for about 10 years ago because of somebody else’s plans, and he never quite recovered. His two wives made other plans too.

But to Sam, it’s all his fault. He believes he holds himself back from life and love. He holds back for fear of failure, despair over his prospects, or just feeling unworthy for happiness.

He works like a dog but ends each day feeling like the prodigal who squandered everything. That makes it hard to face himself. That makes it even harder to face God.

Like Job, he sometimes sits alone in a crowd as a complaint forms in his aching throat. But he chokes on guilt.

He berates himself for lacking faith, for letting fear, despair, and shame dominate him. If he really had faith, he would open his arms and receive the love and life God promises. Sam suspects God lost patience and walked on long ago.

He believes God gave him a chance to have it all together: 401K, stable marriage, kids in college, and a satisfying career. To dress for success but not overdo it. To wave at a friend. He believes he blew it.

Then one day, he gives up, not on living but on the so-called life for which he worked so hard. The life he carefully planned. The one that looks good to strangers but that amounts to nothing more than a mirage.
So he takes a long walk home empty-handed to the God he assumed gave up on him long ago. He plans to offer to run daily errands for room and board.

But while he was still far off, his father saw him and was filled with compassion; he ran and put his arms around him and kissed him. Then the son said to him, ‘Father, I have sinned against heaven and before you; I am no longer worthy to be called your son.’ But the father said to his slaves, ‘Quickly, bring out a robe—the best one—and put it on him; put a ring on his finger and sandals on his feet. And get the fatted calf and kill it, and let us eat and celebrate; for this son of mine was dead and is alive again; he was lost and is found!’ And they began to celebrate (Luke 15:20-24).

My Most Prized Possession
Facing Failure: The Secret to Spiritual Maturity and Resilience
Lose Yourself to Love Yourself
Mirror, Mirror: The Best and Worst Time to Be Me
Eating Disorders, Abraham Lincoln, and Your Fact