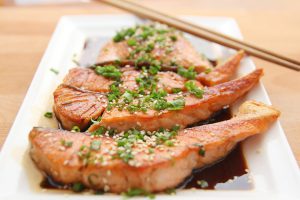 Salt brings out the flavor, but all you see is salmon.

The Paradox of Salt and Light

When Jesus blesses those whose humility, broken-heartedness, restlessness for love, and willingness to lose for kindness and peace keep them down, he tells them they are on the right track. In a world that deems them losers, outsiders, invisible, or collateral damage in the harsh rough-and-tumble of surviving and thriving, he promises them the world in the end and a place of honor to boot (Matthew 5:3-12).
Meanwhile, they serve as salt of the earth and light of a world in which they seem like they are spinning their wheels while the swift and strong race to the front (Matthew 513-16). If the Beatitudes did not leave the congregation’s heads spinning, surely this paradox did.
For salt blends in, bringing out the flavor of the food it touches. It preserves and enhances even as it dissolves and disappears. We say that the salmon tastes delicious, not that the salt tastes good on the fish.
Meanwhile, light calls attention to the one who shines it: “Let your light shine before others, so that they may see your good works and give glory to your Father in heaven” (Matthew 5:16).
Like salt, you must disappear and bring out the best of others. Like one who carries a lantern at night, you must overcome darkness and allow others to see you in action. Contradiction?

The Power of Humility

Let’s look at the temptations they counter: Being the salt of the earth counters the prideful temptation to do good works to promote your image, to make sure you die with a great obituary. Being the light of the world counters the prideful temptation to retreat into an enclave of like-minded elites or to avoid the risk of feeling unappreciated.
The common term is “prideful” or “pride.” Reverting back to the original christening of the congregation as salt of the earth and light of the world, the common denominator seems the opposite of pride: You are the humble. And while the prideful do their temporary damage in pursuit of worldly acclaim and security, the humble do the work that lasts and does the most good.
Paul wrote,

“But we have this treasure in clay jars, so that it may be made clear that this extraordinary power belongs to God and does not come from us” (2 Corinthians 4:7).

Perhaps Jesus means something like this: You, the humble, make the only real difference in the end because you love and because you recognize that the love you share does not originate with you. It originates with God who called you and sent you, who gave you your voice with which to sing.
So put yourself aside and get in the world’s face with love. You will bring out the best in people even if they never appreciate you. You will open their eyes to God’s love even after they forget your name. Rest assured God will not forget you.

Self-Esteem: Handle with Care
Lose Yourself to Love Yourself
The Comic Beatitude
Witness That Nourishes, Witness That Inspires