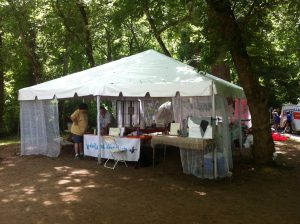 Blessed are you when people revile you and persecute you and utter all kinds of evil against you falsely on my account. Rejoice and be glad, for your reward is great in heaven, for in the same way they persecuted the prophets who were before you (Matthew 5:10-12).

At the Wild Goose Festival, Carl McColman gave a talk on living monastic spirituality outside the monastery. With a powerful story, he countered any notion that this means retreat into one’s room and navel-gazing. A small group of Trappist monks in Algeria lived as good neighbors with a largely Muslim population. They offered medical support to fighters on both sides during a civil war. They could have left. Eventually, insurgents kidnapped and killed them.
Their witness lives on. An award-winning film, “Of Gods and Men,” keeps their story alive. As he discussed their martyrdom, Carl offered an aside that sticks with me:
The Greek word for “martyr” also means, “witness.”
Carl recounted a scene in which a frightened monk said to his abbot, “I didn’t sign up to be a martyr.” But he did sign up to be a witness. And as I took in Carl’s telling of the scene, I could not avoid the question: Did I sign up to be a witness?
What can I do but identify with the frightened monk? But what can I say but, yes, I did sign up to be a witness?
Just a few feet from the tent where Carl spoke stood the spiritual direction tent, my home base. As a member of the spiritual direction team at the Goose, I met with gifted people who arrived from many roads less traveled. As I listened to them, we listened together to the Spirit’s word and movement in their telling.
Listening is my witness. But those who visit offer a powerful witness of their own.
Psychotherapy pursues emotional pain reduction and behavior change. Spiritual direction does not. Rather, it seeks discernment of God’s presence and action in the person’s life.
Nevertheless, every story of epiphany and vocation includes chapters on loss and estrangement. A woman offers her creative gift to the church and gets it shoved back in her face. A man who offers much grace to others struggles to accept it himself. A Hispanic woman in a demanding secular ministry feels triple pressure to prove herself in the face of prejudice.
But a chapter does not tell the whole story. Their witness tells it. They suffer faithfully as unknowing martyrs. Like the monks in Algeria, they could walk away from their calling. But even when God seems absent, they persevere. And they take the time to pause and search their memories and hearts for the fingerprints of God.
They thank me, but I must thank them louder for their witness. We part in a thank-fest.
Talks like Carl’s provide nourishment worth twice the price of admission to the Goose. But I keep coming back especially for those who quietly slip over to the spiritual direction space. Who can explain how stories of suffering love strengthen our faith? You cannot explain it. You have to witness it.