The Inbreaking of Mercy in a Merciless World 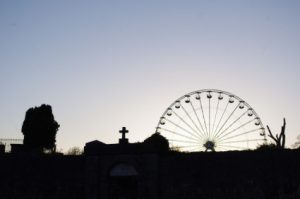 Blessed are the merciful, for they will receive mercy (Matthew 5:7).
When I recall seasons of grinding depression or prolonged dread and anxiety; when I remember traumas or even the nightmares that still awaken me, a common perspective runs through them: I experienced the world as merciless and felt surrounded by indifference with no gateway out.
Yet, without memories of such darkness, I would not notice Christmas starlight.
Christmas is nothing if not the inbreaking of mercy in a merciless world. Jesus came to a nation that knew itself especially intimate with God, uniquely entrusted with a message that one loving Lord seeks communion with all people. Yet, pagan occupiers muffled their voice. The indifferent gods of the Romans cared not a whit for mortals and carried on with their transcendent soap opera. No being exceeded their supreme deity, Jupiter, in mercilessness.
Christ’s birth took place while his parents ran an errand to register themselves as numbers for Roman records. After the birth, the governor slayed every male baby in the area because of astrologers’ readings that from the dark hinterlands where the numbered people dwelt, a true Son of God was coming (Matthew 2:1-6, 16-18). Herod had no idea that such power could be merciful, that the threat he could not quell was Mercy itself.
From the merciless indifference in the holocaust Herod wrought, Mercy nonetheless emerged and lived. Lest you think that Mercy itself was merciless, leaving the children and their families in inconsolable grief forever, Mercy joined the fray, took a stand in the blood, sweat, and tears of history, and died at the crucifying hands of the same occupiers.
And from there Mercy still rose again and lived with the children and their families, with the occupiers enslaved by their own powers, with me groping as I did through what seemed like endless darkness and unseen pitfalls of depression and dread. We believe that in this season we celebrate the decisive event in history with no rival, the moment when Mercy broke the indifferent laws of nature, economics, and political power, when we awoke from the nightmare…
We still watch the nightmare on the news, dream it in our sleep, and live it in our darkest days. Yet, note this sacred paradox: Although irreducible and unrepeatable, the Christmas story recapitulates itself in your life and mine. Recall mercy breaking through your darkness, the wheel of indifferent fate jammed as your spirit flew like a bird through its spokes and lit on its rim. Recall the miracles when in so many words and ways the water changed to wine, the fierce storm calmed, and the once-dead staggered squinting from a tomb into the midday sun.
Remember it, tell about it, live it. Somebody desperately needs to witness this. That somebody may be you.