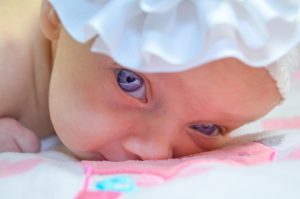 Blessed are the merciful, for they will receive mercy (Matthew 5:7).
Sometimes I wish Augustine and company never cooked up the doctrine of original sin, the belief that we were born guilty.  It leads to so many misunderstandings, from the image of a stern and punitive God who wants us to slink about in shame to the notion that sex is evil since our parents’ passion presumably passed on bad seed.  Yet, other times I don’t see how to live without the grim doctrine because of the ease with which I slip into ego armor and need remembrance of my sinfulness to remind me that I need forgiveness as much as my foes do.
Rather than arguing for or against it, I wish to call attention to original sin’s sunny implication, “sunny” not just in the sentimental sense of smiles and cheer, but in the sense of life giving power.  The bright backside of the dark doctrine is original mercy.
The mercy does not originate in us, but in God.  If you have ever known the consolation of receiving forgiveness, if you have ever reached the summit after the long climb of forgiving others, if you have ever lived the parable of God’s kingdom in restored relationships, you know how essentially forgiving and gracious God is.  And when you know that, you know yourself at last.  For then God’s mercy so saturates you that you show mercy yourself, and in doing so, you live the life God intended for a child created in God’s image.
Original sin is not the main point.  Original mercy is.  Whatever your circumstances, wanted or unwanted, rich or poor, privileged or oppressed, you were born in the abundant, life-giving, vision-making sunlight of God’s mercy.  You were born not in the night of condemnation but in the morning of forgiveness before you ever had a chance to gossip or cheat on your taxes.  Mercy beyond your imagining generates your very being.
The fourth evangelist said that we know nothing of God except one thing.  He concluded his gospel’s rhapsodic prologue with the verse, “No one has ever seen God.  It is God the only Son, who is close to the Father’s heart, who has made him known” (John 1:18).  Jesus, who died and lives now for all, embodies the mercy that is God’s heart, the one thing we know for sure of God.  Getting straight to the point, John boldly wrote later,  “God is love” (1 John 4:8b), then in a few verses, he repeated, “No one has ever seen God; if we love one another, God lives in us, and his love is perfected in us” (v.12).
No one has seen God, but anyone who sees mercy sees God’s Son, God’s very heart.  When you are merciful, you tell the only truth of God you can say for sure.  Meanwhile, you tell the truth of yourself.  And it sets you free.