Learning from Mr. Strongmouse and the Baby 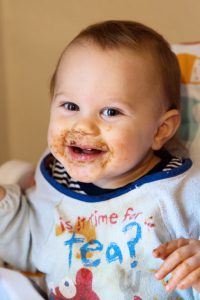 Blessed are the meek, for they will inherit the earth (Matthew 5:5).
Waiting to seal a deal at Tom Sipp’s Rome Motor Sales for a 2005 Honda CRV for my stepdaughter, Julia, I spied a children’s book on the coffee table, Mr. Strongmouse and the Baby. Despite the absence of a toddler in my lap, I perused the tale of Mr. Strongmouse’s epic transformations.
The first involved leveraging his strength. Literally. Unusually strong for a rodent, Strongmouse trained and buffed up for herculean feats at the county fair and then in his own TV series. All this came with a cost. He became the world’s smallest bull in a china shop, innocently breaking everything he handled, unable to restrain his power.
Then one day his neighbor, Mrs. Petalsoft, asked Strongmouse to care for her baby as she attended to urgent matters away from home. Efforts to keep quiet while the baby napped, feed the tike without getting food on everything, and bathe the child without flooding the bathroom all failed. So he enrolled in the Softly-Does-It School and learned how to decorate cakes, build a house of cards, and perform other tasks that require a light touch. In the end, Mr. Strongmouse became known as Mr. Very, Very Gentle.
I thought of my son in his long ago toddlerhood, how he revered my strength and played at having such power someday as a construction worker or soldier. I wondered what he would have thought of this story of a still-strong mouse gaining more power through gentleness. It is a lesson I still want to teach him, that I think he has learned and continues to learn as best he can.
That is meekness, the ability to harness strength for gentleness. It makes for a safer, more peaceful world than strength used to intimidate and dominate.
Yet, the entertainment industry only finds more ways to glorify violence with special effects. Presidential politicians resort to the verbal tactics of bullies. Parents and schools turn up the pressure on kids to beat the competition. In this environment, gentleness and kindness may get an occasional dewy-eyed nod as we remember Mr. Rogers, but we fear having our children become babes in the woods in the dog-eat-dog world of 24/7 news.
Such pressures against meekness existed in different iterations across eras and cultures, from the hierarchical honor/shame culture of antiquity when Jesus first blessed the meek to the present conditions described above. Amid a conventional wisdom that still prizes martial threat and impenetrable walls over vulnerable trust and bridge-building, it takes faith in the ultimate power of God’s kindness to maintain meekness without caving in to the cultural pressure.
“By your fruits, you shall know them” (Matthew 7:16) Jesus taught people anxious for leaders of real faith rather than shams and charlatans. That fruit is nothing if not meekness, the gentle strength that reached its highest expression in Christ’s passion. As his students, may we seek our strength from him and bring it to bear in the kindness our frightened world so desperately needs.