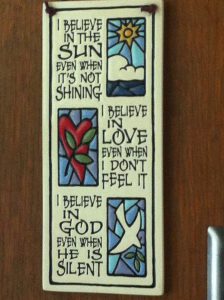 Words etched on a concentration camp wall, now displayed in our kitchen.

Blessed are those who mourn, for they will be comforted (Matthew 5:4).
The concentration camp in Cologne, Germany served Nazi intelligence. There they kept detainees thought to know useful information. Prisoners there faced interrogation, torture, and almost certain death by hanging.
Oddly, the guards on the lower level allowed inmates to write on the walls with nails, lipstick, or whatever else worked. From her visit to the museum there, travel reporter, Ashley Fleckenstein, offers her favorite inscription: “Everything is transient, even a life sentence.” I would love to ponder these writings reverently, expletives and all.
The museum displays long-forgotten Nazi propaganda posters on an upper floor. Yet, a prisoner’s words on the cellar wall reach and inspire millions.
I can scarcely imagine long detention without windows. Less yet can I imagine hope flourishing without the light of the sun, etched now in stone:

I believe in the sun even when it is not shining.

I can scarcely imagine the loneliness there. Less yet can I imagine love’s resolve burning on without air.

I believe in love even when I don’t feel it.

I can scarcely imagine the desperate prayers bouncing back from ceilings and walls. Less yet can I imagine faith rising after society’s betrayal.

I believe in God even when he is silent.

The anonymous saint wrote those lines as a refrain to a hymn hallowing the silence.
In Rome, Georgia this weekend, neo-Nazis marched and demonstrated, their speeches disturbing the air with guttural noise and saliva spray. Our African-American female police chief protected their right to speak. Their words will dissipate into the air, forgotten like the propaganda of their spiritual forebears.
We will not forget the words from cellar in Cologne. They are written in stone.