The Plain Truth of the Clear-Eyed Man 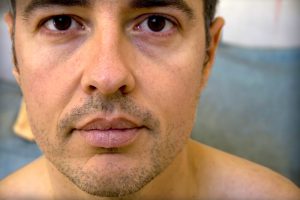 Blessed are you when people revile you and persecute you and utter all kinds of evil against you falsely on my account. Rejoice and be glad, for your reward is great in heaven, for in the same way they persecuted the prophets who were before you (Matthew 5:11-12).
In my last post, “Embarrassed by Miracles No More,” I briefly mentioned Jesus’ miraculous healing of a blind man by spitting on dirt, rubbing the mud in his eyes, and having him wash it out. Jesus opened not only his physical eyes, but the eyes of his soul. This once-blind man still helps us see.
The story appears in John 9. Born blind, he begged and waited by the Pool of Siloam because of its reputed healing powers. When he suddenly walked the streets and looked people in the eye, he caused a stir.
With clear-eyed innocence, he told plain truth throughout the story. He seemed the only one besides Jesus who saw things as they are. Perplexed neighbors questioned whether he was an imposter. “I am the man,” he said. He named his healer, Jesus, and described the healing procedure. Just the facts.
Mentioning Jesus won him time under the Pharisees’ hot light for interrogation. Again he repeated, “He put mud on my eyes. Then I washed, and now I see” (v.15). Such simple words, but such confusion they provoked! The Pharisees fussed over whether the healing power originated with God. For Jesus healed the man on the Sabbath, and healing is work.
So they asked the man what he thought. “He is a prophet” (v.17), meaning he opens eyes to God’s truth. Not the answer they wanted, so they questioned his parents. Dad and Mom confirmed congenital blindness but sent them back to their son to defend himself over the manner of his healing: “He is of age, ask him” (v.23).
Do you see where telling the truth got him? Alone and in trouble. But he never relented.
Under the Pharisees’ lamp again, he listened to them declare Jesus a sinner, and he responded: “I do not know whether he is a sinner. One thing I do know, that though I was blind, now I see” (v.25). Back in a tizzy, they asked again what Jesus did, and he jabbed: “Why do you want to hear it again? Do you want to be his disciples?’ (v.27)
Just out of sight, someone snickered and shuffled away. The once-blind man pronounced the obvious: “If this man were not from God, he could do nothing” (v.33). The Pharisees declared the clear-eyed man a rogue unwelcome in their assembly.
Jesus quickly found him, and asked if he believed in him. Well, if you had to choose between a guy who healed you of blindness and a bunch of arrogant hotheads who considered that bad news, whom would you pick? “Lord, I believe,” he said.
He gained his sight but lost his place in the community. He lost his parents’ loyalty but gained the Son of God as a best friend forever. The clear-eyed man lost so much but gained so much more because he told the truth that he could not see until Jesus touched him.

Question for Reflection and Comment: What does Jesus help you see today? What happens when you tell about it? Or what would happen if you did?