I Want to Know Christ 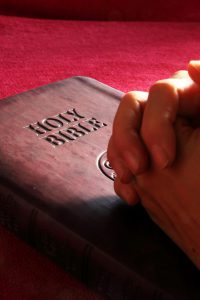 My grandfather wanted to know Christ.

Blessed are the pure in heart, for they will see God (Matthew 5:8).
As a medical student at Johns Hopkins around 1920, my grandfather got a double wallop of pneumonia. Fine medical minds projected he would not live to take final exams. Whether he took those exams, he lived and discerned a new call to face the tests of pastoral ministry. For he believed that God got him through that fatal disease for a reason.
Rev. C. Rees Jenkins served as a missionary to Japan, a pastor to small churches in rural North Carolina, a VA Chaplain, and in retirement, a volunteer prison minister.  He died at 96 about two decades ago.
I remember his quiet, steady energy and the shy twinkle in his eye. I remember the feel of his hand on my hot forehead after he drove 30 miles just to pray over me as I lay in bed with a fever.
Often he seemed preoccupied, and my grandmother snapped him to attention with a sharper tone to her repeated question.  He seemed in another world sometimes. In a sense, he did dwell in another world. For whether he attended to his garden or the VA patient, he made no distinction. Christ lived simultaneously here and there.
Paul’s verse etched on his tombstone sums up his preoccupation and passion:

I want to know Christ and the power of his resurrection and the sharing of his sufferings by becoming like him in his death, if somehow I may attain the resurrection from the dead (Philippians 3:10-11).

When good Jews like Paul said, “know,” they meant intimate, personal knowing that encompasses and far exceeds the stuff we study and research.  Paul met Christ on the Damascus road, and grandfather encountered him in a university infirmary. In different places and times, both heard the call: “Take up your cross and follow me.” Then both answered, “Bring it on. I want to know Christ.”
Purity of heart is to will one thing, and for the disciple that one thing means to know Christ. We saw that desire in earlier posts about Emanuel Woods’ ministry among youth in a poor Louisiana community and Mother Teresa’s ministry to the poor of Calcutta.  So if you want to know Christ, let go of everything else to which you cling and go to the hungry, thirsty, lonely, naked, sick, and imprisoned. Then give whatever you can because Christ meets you there. And Christ called you into being with a word and gave you purpose with his thirst.
Common sense says you don’t find your heart’s desire among such people in such places. But your heart knows better.  The Christ whom you long to know made you that way.