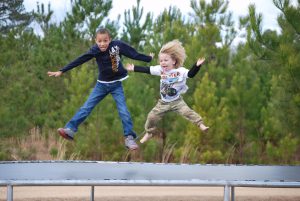 “Let’s jump!” makes for better politics than, “No way!”

Dreams of life together

When a couple divorces, adults and children pick up the pieces of their dreams. Then they repair them or start rebuilding from scratch.
So it is when a church splits or when backbiting starts at an office where the boss plays favorites. A town cracks under racial tensions. Citizens of a nation take sides between mudslinging candidates.
Without dreams of what life together should look like, maybe our divisions would not hurt so badly. But absent those dreams, a village of a thousand breaks into a thousand lonely factions of one. Even a thousand different dreams keep us hungry for life together.

Conventional wisdom defines politics as arranging leadership and social structures to work out our differences in an orderly manner. Underscore, “Work out our differences.” Realistically, dreams will conflict. How boring history would be otherwise. How inevitable it all seems.
But how would we behave if we turn that understanding of politics inside-out? Envision politics as the business of seeking mutually beneficial ends and pulling together to meet them.
From this perspective, politics begins when two or more gather and someone says, “Let’s.” Let’s go bowling. Or let’s have a potluck dinner. Let’s build a house for someone who lives on the street. Or let’s elect a mayor. In cases from the mundane to the grand, we must take time to listen, find common ground, clarify our goals, make a plan, and execute it.
Conventional wisdom, on the other hand, says politics begins when two or more gather and one says to the other, “No.” As we must. We need boundaries, privacy, a reasonable degree of control over our bodies and our space. But if that is the starting point of politics, look where it’s gotten us.

Entrenched cynicism vs. the humility to hope

Don’t get me wrong. I do not lament debate. As long as we do it for the sake of answering needs larger than those of our egos and factions alone, I invite it. We need leaders with the humility to hope that debate in good will make each party smarter and more amenable to win-win solutions.
I feel so tired of legislators who never imagined or hoped for a politics of “let’s.” Also, I grow weary of pundits who only begin one sentence with “let’s”: Let’s you and him fight. Both breeds roll their eyes and smirk at talk of the common good.
But I refuse to give in to such cynicism.
What if the great unrest and anger of this political season stems not from self-interested individuals and factions grousing to get what they want for themselves? Rather, suppose it expresses the loneliness of dreams spoken to deaf ears?
Suppose like children of divorce, we lament the loss of leaders who listen to us and to each other with an eye toward the good of the family?
What if we all hunger and thirst for righteousness and long for leaders who do too?
Related Posts