Liberation Makes Winners of Everybody 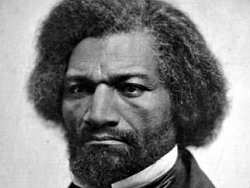 Liberation from slavery mattered most to Frederick Douglass – for both the black slave and the white slave owner.

Emancipated slave, Frederick Douglass, published his autobiography in 1845. Not only the content but the very existence of the book spoke volumes. For he saw learning to read and write as crucial to liberation for him personally and for his race.
He painted a sad and memorable portrait of Mrs. Auld, wife of a man who bought him at about eight years old. “My new mistress proved to be all she appeared when I first met her at the door, — a woman of the kindest heart and finest feelings.”[1] She took it upon herself to teach him his ABCs and spelling lessons.
But when Mr. Auld found out, he forbade it, specifically warning that reading would make him unmanageable. This changed Mrs. Auld as Douglass recalled:

Slavery proved as injurious to her as it was to me. When I went there, she was a pious, warm, and tender-hearted woman. There was no sorrow or suffering for which she had not a tear. She had bread for the hungry, clothes for the naked, and comfort for every mourner that came within her reach. Slavery soon proved its ability to divest her of these qualities. Under its influence, the tender heart became stone, and the lamblike disposition gave way to one of tiger-like fierceness.[2]

Ironically, young Frederick learned the key to his liberation by hearing Mr. Auld scold his wife. He also learned about the inevitable spiritual suicide of the oppressor.
I write these posts to offer validation and encouragement in faith to people in emotional pain. When I started this project over two years ago, I did not expect to address matters of race very much. But as racial tensions rise and injustices come all the more clear in our society, I cannot separate them from our everyday anxieties and depressive struggles.

Liberation is still needed. And liberation makes winners of everybody.

People in racial minority groups face significant obstacles and steep, slippery slopes to enjoy the benefits of American prosperity. As a white man, trying to put myself in their shoes overwhelms me. From my vantage point, I see plenty of reasons for despair and resignation. When I have the privilege of listening to a minority person in therapy, I often find myself the student of their resilience even as I offer what I can.
The Emancipation Proclamation outlawed slavery in America, but Jim Crow followed. And after Jim Crow, white flight to the suburbs and mass incarceration among other things perpetuated the conditions that prolong black misery but perpetuate the tragic soul sickness Mrs. Auld suffered.
Black friends tell me not to feel guilty or apologize for privilege. Own it. But take responsibility for it, and use it wisely to build bridges rather than walls between us, to open doors of opportunity for all. Do it for brothers and sisters of color. And do it for yourself.