Losing My Religion on the 50 Yard Line 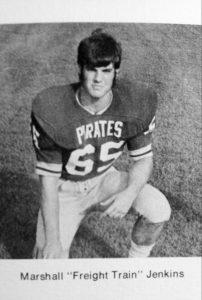 Blessed are the pure in heart, for they will see God (Matthew 5:8).
In my youth, I practiced a pagan religion that remains alive and well in our culture.  Worship occurs in large arenas where one horde of uniformed young men collides with another to stop the enemy tribe from carrying, kicking, or throwing the partial remains of a slain pig past a goal.  We call this religion football.
Through football, I sought salvation from inferiority feelings resulting from running with two left feet, going cross-eyed when a ball sailed in my direction, and failures dodging collisions in all sports including ping-pong.  In football, they rewarded collisions.  I took it up by default.
Football promised the end of loneliness since I could see the celebrity status attained by young men willing to wear caged helmets and supplement their underwear with other strategically placed plastic shields.  They wore numbers on their chests and backs.  I identified more with my number than my name.
I may have been small, but I was slow.  So year round I lifted weights, ran long distances, sprints, and stadium steps, and rigged a dummy on a brick wall corner to practice blocking.  This driven asceticism led to a starting position as a 155 pound offensive guard my sophomore year, and without growing much more, I held on to that position for dear life until I graduated.
Our line coach, Tommy Thompson, saw to that because he loved me.  I still have his cleat marks on my butt to prove it.  He taught me how to block behemoths and come out alive.  Against all odds, my dreams came true, and the religion delivered bliss.
Then one Saturday during my senior year, still sore after playing the night before, my girlfriend, another couple, and I attended a game with 50 yard line seats in Chapel Hill.  Seated in front of us, a JV player exclaimed effusively and incessantly to his family over the godlike powers and charismatic personalities of the varsity players to whose abuse he subjected himself regularly in practice.  Perturbed, I thought loudly: For God’s sake, son, they’re only football players, and it’s only a game.
Even worse, I realized I could be that guy.
The noise of the crowd, cheerleaders, stadium horns, loudspeaker, and manic JV player receded, and silence descended.  I lost my religion.  I could no longer worship in places like this.
But this is not a story about that religion but another, the one in the background, the one of love that does not keep score, one in which compassion triumphs over competition and the Almighty does not flee humility but chooses it and bids us do the same.  It’s always there as we choose other religions then mourn their passing.
Football prepared me for many challenges, and I cherish the memories.  But exactly 40 years later, I prefer my name over my number.  It’s the name I hear when called in the night from time to time, assured of love and sent to pass that assurance on to fellow little ones of God.