The Kingdom and the Empire 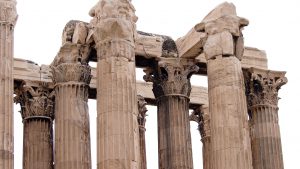 The empire did not die with Rome’s glory. Neither did the kingdom of heaven.

Blessed are those who are persecuted for righteousness’ sake, for theirs is the kingdom of heaven (Matthew 5:10).
To the ears of US citizens, monarchies exist in fairy tales and a few old countries where royalty holds on. Yet, the first Beatitude promises the kingdom of heaven to those who gratefully acknowledge that they have nothing without God anyway. This final one promises the same kingdom to those willing to give it all up for love of God.

The Beatitudes in between them offer rewards of a close relationship with the King of the kingdom: comfort, belonging, faithful love, mercy, intimacy, and a place at the table. One expects such blessings of a monarch’s royal household or most powerful deputies. Yet, in this kingdom, the grieving, humble, yearning, forgiving, pure, and nonviolent get those rewards.

Accustomed to both the Beatitudes and Camelot, we don’t see how radical and liberating this is. Accustomed to religion domesticated in personal piety, children’s activities, and quaint ritual traditions, we forget that religion has as much to do with power as politics and commerce do.

Jesus promised the kingdom of heaven during Caesar’s reign. Oppressive taxation, intermittent government terrorism, and periodic pressure to worship the emperor made for a kingdom that reserved blessings for the power elite, not for broken-hearted, gentle, compassionate folks. Declaring the persecuted the inheritors of ultimate power never made worldly sense.

And it still does not. In our democratic experiment, we see economic disparity grow and elected representatives work more for the benefit of those who fund their campaigns than for the mass of voters. Most of us feel like we do not have a voice. We labor at the pleasure of politicians and CEO’s who make no place for us at their tables. We may not have it as bad as Palestinian Jews under Roman occupation, but we remain insignificant subjects in the empire.

Meanwhile, we take for granted the empire’s terms for security and happiness: Fight for what is yours. Never let them see you sweat. Play to win.

Yet, poverty of spirit acknowledges everything as God’s. Mourning laments every loss and injustice, for oneself and for the disadvantaged. Meekness exerts strength through gentleness, building up rather than putting down. And those are just the first three Beatitudes.

Beginning with the Beatitudes, Jesus calls the empire’s program for security and happiness a snare and a delusion. We can see very clearly that playing by the empire’s rules keeps us dissatisfied with what we have and who we are. We know that neither money nor power make anyone very happy.

This last Beatitude blesses those willing to give it all up, from their reputations to life itself, for something of ultimate importance: Righteousness. Which is right relationship. Which is steadfast love. That is what God gives us and what God asks of us.

God does not ask for this to subjugate us like a Caesar. God made us in God’s image, and God is love. So only a life surrendered in love knows real freedom. Only a person so surrendered knows her voice and sings. Those willing to lose their lives on the empire’s terms will find their lives in the kingdom where Love rules.