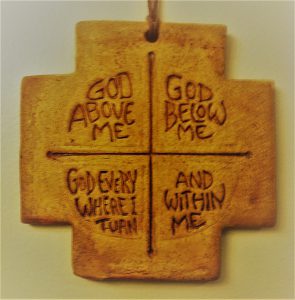 Young Patrick sat on a lush Irish hillside chewing bilberry and lamb’s lettuce snagged from the brush moments before as he patrolled the sheep. Turning over berries and leaves in his mouth, he turned over memories and meanings in his mind. Bleating sheep and the small voices and rustling sounds of a few meadow pipits stirred the wide silence.
Raised a Christian in Britain just a century after Christianity went from persecution to power in the Roman Empire, it seemed fair enough to mouth the creed and play along with the rites of church. But just before his sixteenth birthday almost three years ago, raiders kidnapped and sold him into slavery in Ireland.
So here under vast blue sky with untold years of slavery before him, all his Latin and grammar lessons came to nothing among people with no written language and no clue about Christianity. If God intended to leave him homesick in a land of ruffians who see him as a thing to use, he might as well live alone with dumb sheep.
Who knows the turning in his mind, perhaps from desperate prayers to sullen recalcitrance before God’s cold silence? Who knows his heart’s turning that somehow warmed him not only to God but to his captors?
It sufficed to draw him into conversation with the Irish and learn the tongue. Thus, he heard rumors of a way to escape back to Britain. Which he did.