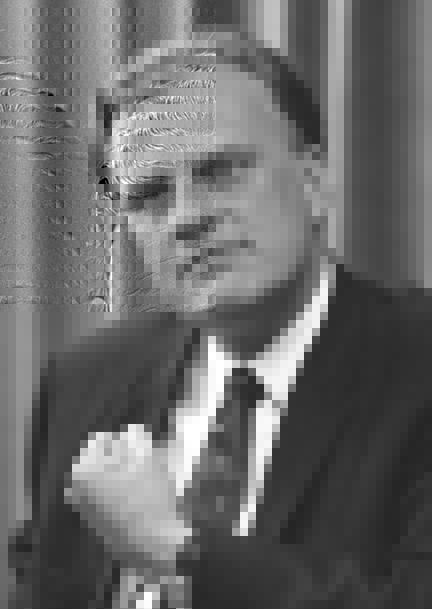 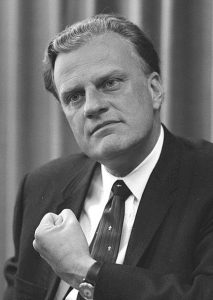 When Billy Graham First Reached Me

As far as I know, I never reached Billy Graham on the mountaintop. But I reached his trash cans. I think.

As a teen back in the 70s, I took a wrong turn in Graham’s hometown, Montreat, NC. Winding up a mountain road, I came upon someone’s neatly arranged garbage cans with the initials BG painted on them. Fearing that I might stray onto hallowed ground, I turned and wound back down.

It could have been Bubba Gump’s garbage. But I took no chances.

Graham, on the other hand, managed to reach me more than once.

Late one hot summer afternoon when I was 11, my mother found me languishing in boredom. She suggested that I watch the Billy Graham crusade on TV while she listened from the kitchen. What the heck? Why not?

I do not recall the details of the message, but he mesmerized me. He convinced me that the world was in dire straits. By his account, dark social and supernatural forces worked day and night to subvert everything good. Ultimately, they will fail, but in the horrendous meantime, I would do well to hand myself over to the one who will prevail, indeed who already prevailed, Jesus Christ.

Yes, he scared me. And half a century later, I don’t care for scare tactics to promote the gospel. They too often prompt short-lived, shallow commitments that wear off when anxiety abates. But in the rich soil of church and family, he planted something more lasting and valuable than a scare.

For the first time in my life, I realized that life is serious. Overwhelming, in fact. And if I must be overwhelmed, let God overwhelm me. With love.

Billy Graham artfully wove the love of God into the message and got through to me that somehow, I mattered to God. Everyone in that full stadium where he preached mattered to God. If I were there, I would have come forward, just as I was.

My parents raised me in church. Our church had no altar calls, and frankly, I’m glad. But Graham delivered a needed jolt, a jolt all of us need from one source or another sooner or later.

An Ongoing Relationship with Jesus Christ

Afterward, I read his advice column from time to time in our local paper. People wrote with all kinds of problems, and he always offered the same solution: Turn your life over to Christ.

That annoyed me after a while. I realized that if we answer everyone’s needs with an altar call and no action, we bear watered-down witness to the gospel. Eventually, I grew up and became a psychologist, doing what I could with the few gifts I had from a point of view of faith, constrained by professional boundaries, of course.

But Graham convinced me that authentic faith stands up to be counted often enough that people at least know where I’m coming from. So I continually learn how to discern when to witness with my deeds and when with my words by the leading of the Spirit who knows what’s going on much better than I do.

Reinhold Niebuhr criticized Graham for failing to challenge the American propensity for private faith that heeds no call to action in the public square. Niebuhr made a valid point, and the problem is only getting worse.

Yet, Graham planted a seed that grew in many of us into an ever more active engagement for social justice and peace: He emphasized over and over one’s personal relationship to Jesus Christ. Yes, that encourages prayer and devotion that, in theory at least, could remain private.

But if one is truly engaged in a relationship with the living Lord, a retreat from the world is not sustainable.

Soon after Graham convinced me of the importance of that relationship with Christ, a peculiar question arose within me. Where is Jesus? Yes, I think he hears my prayers when I lie in my bed or walk to the river, but I felt this restlessness to find him somewhere, to see his face, to show mine.

I found my answer in Matthew 25:31-46, the Parable of the Sheep and the Goats. It depicts people on judgment day hearing that they encountered Christ in their lifetime, but they don’t recall where or when. They find that they did when they encountered the hungry, thirsty, naked, sick, imprisoned, the “least of these” in a world that counts as least those who suffer on the margins. “Truly I tell you, just as you did it to one of the least of these who are members of my family, you did it to me” (Matthew 25:40).

I could have done much better, I suppose. I could have become a missionary like my grandfather. I could have lived in solidarity and service to the poor in Greenwich village like Dorothy Day or in Robeson County where I grew up. I listen to people in emotional pain and some in spiritual uncertainty. Perhaps God will call me beyond that someday, or it may be all God has in mind.

But along with my prayers, I keep that ongoing relationship with Jesus there. When I stray from that relationship, the Good Shepherd comes and gets me eventually.

And Jesus also meets me when I am hungry or thirsty, sick or in prison, naked and lonely as I have been from time to time in ways either metaphorical or actual. God hears my prayers then as always, although it may take years before I recognize the fruit of God’s response.
I don’t know if that’s what Billy Graham had in mind, but if he was anything like you or me, he probably didn’t know how the relationship with Christ he encouraged would play out for any of us. All he knew was the truth he could not refuse to tell even if he wanted to.

Whatever Billy Graham’s limitations in the telling and mine in the responding, I am glad he spoke that hot summer day, and I’m glad I listened. I suspect our friend, Jesus, is glad too.

I Want to Know Christ
Our Mother, the Peacemaker
Discovering Grace With My Father
Crisis Telephone Contemplation