The Promise After the Planting: Growing Faith on the Farm 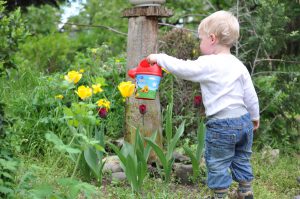 Farm visits as a child took me to the roots of my faith.

Blessed are the meek, for they will inherit the earth (Matthew 5:5)

He also said, “The kingdom of God is as if someone would scatter seed on the ground, and would sleep and rise night and day, and the seed would sprout and grow, he does not know how. The earth produces of itself, first the stalk, then the head, then the full grain in the head. But when the grain is ripe, at once he goes in with his sickle, because the harvest has come” (Mark 4:26-29).

My mother was born, Betty Jane Marshall, and grew up on a farm in the Shenandoah Valley of Virginia during the Great Depression and the early years of World War II. When my brother, sister, and I were young children, she and my father, Rees Jenkins, drove several hundred miles north for occasional family visits.

What a wonderland for a little boy! Yet, I had no idea what a rare glimpse of Americana I got there. Viewed from the farmhouse porch, a hay field spread to the right, a cornfield at 10:00 just past the hen house, and patches of potatoes, green beans, cabbage, carrots, and more straight ahead. Apple trees shaded the porch. I played hopscotch on hard earthen chips in the yard until my brother poked fun at me for jumping on cow poop. I had no idea.

So, yes, there were cows along with a couple of bulls, a mule, chickens, and lots of hogs. My uncle, John Marshall (for whom I was named) poured gallons of feed into the hog troughs daily, and I marveled at the enormous swine, much more massive than I imagined after reading my illustrated Three Little Pigs storybook. They were not the pink, snouted cherubs pictured there, but docile, snorting, mammoths. Yes, they loved to roll in the mud, and they stank to high heaven. Had they not been so huge and I so small and scared, I might have joined them in the snorting and rolling and stinking.

In the farmhouse, we lived with whatever climate nature offered that day, regulated only by large wood stoves. Even in summer, we needed those stoves in the morning chill. The warped floor tiles felt like ice under my little feet when I landed from the high, feather bed. While I dreaded those first steps every day, at least I no longer heard coyotes howl as they had in the pitch-black night.

I did not understand why my mother’s family lacked flush toilets, forcing us to visit the outhouse near the cabbage whenever we had to go. Neither did I understand or appreciate having to take a bath in an aluminum tub in the middle of the kitchen where my Aunt Grace chattered and prattled. The sulfuric smell of the water overwhelmed the sweetness of baking bread. I bathed very fast and got out of there.

Now I understand the spartan conditions a bit better. Civilized folk seldom arrange their economies to benefit the farmers who feed them. Such remains true today, as huge, industrial farm operations lap up the subsidies and drive small farmers like my grandfather, Lacy Marshall, and his son, John, out of business. Not long after Lacy died, they closed down the farm, packed it up, and left for John to finish his productive years working at an airport in Staunton. Only the old, rusty pump that gushed iron water remains on that plot of land annexed in the George Washington National Forest.

Similarly, in New Testament times, the Romans so heavily taxed the farmers of Palestine that many had to sell the farm or even themselves to work vineyards and fields owned by absentee landlords. However, Jesus tells this parable about a farmer who still holds on, who still stakes his life on the work. Something more than the pursuit of wealth and comfort drives a farmer, something like tradition, love for the land, and wonder that the sowing and reaping, slopping and slaughtering, milking and threshing and patching all yield abundance way beyond the measure of the work.

The farmer of Jesus’ parable “would scatter seed on the ground, and would sleep and rise night and day, and the seed would sprout and grow, he does not know how” (vv. 26-27). We modern urbanites and suburbanites ask, “How can he bear to work so hard and hope for a harvest but ‘not know how?’” Nothing gets under our skin like not knowing how, like working hard and then waiting to see what happens without managing the process. We want our research and development programs and Google to keep us informed. We want to know how or why and what we need to make good better without any inconvenient mystery about it.

Moreover, we want it now. Yet, Jesus said, “The earth produces of itself, first the stalk, then the head, then the full grain in the head” (v.28). We don’t want to hear it. But it’s still as true today as it was then. The outcome of our labors, the upshot of our work and worry, is neither in our hands nor on our clock.

Yet, I suspect that far from troubling the farmer, that mystery drew him into the work and more than work, into trust, faith, confidence that God is doing something good, we know not how. In turn, the mystery drew into a life of trust my grandmother, Alice Marshall, toiling all day to feed her family and the farm hands. Her youngest girl, Betty, helped in the kitchen, watching and learning that life of trust.

Another 40 years later, and that little girl is a mother on the phone with the boy who once bathed in the kitchen after hopping from cow chip to cow chip. He is a man now with a Ph.D. and family and a responsible, high stress counseling job. And he is crying because it’s all falling apart, and he’s worn out from praying and listening to the long, groaning silence that follows his prayers in the darkness. All he wanted was to serve God in whatever way he could with his two or three gifts, and it all seemed for naught. Betty told him, “Son, I know it’s hard to believe, but God is doing something good through all this.”

She who had witnessed her father pacing the floor during a drought, who saw her brother’s normally happy-go-lucky face tense up over a plague among the pigs and a ledger that just wouldn’t balance; she who lived with them nevertheless through the improbable harvests of more good tomatoes, corn, cabbage, eggs, butter, and country ham than anyone could imagine emerging from their patch of earth and from toils that never seemed enough: She knew what to say to her son. God is doing something good anyway.

Such is faith. The mystery, the hope in things unseen, draws us into life even as we bear our crosses. Although we see the necessity of our work, we drop the storyline of self-sufficiency and look at the hard, lovely fact: We till, we plant, yes, but then we wait. And in God’s time, nothing is wasted, not even the love expended before foreclosure, divorce, or death.

Some farmers in antiquity had to sell themselves in the end. My uncle had to close it down and tend to airplanes in Staunton. I had to divorce and fight for my job. Some do not live to see the fruits of their labors, the yield of their love.

But faith does not stop with that. Faith maintains that love is never wasted, that seeds will germinate and yield unforeseen fruit in God’s time. Such is the kingdom that Jesus proclaimed, the kingdom that comes when we accept every good thing as God’s gift even in hard times, the reign that will unfold if not now then in the life to come as we taste and see the fruit God made from our labors.

When Wanda and I visit her family in rural Alabama, I remember my childhood visits to the Marshall family farm. John Cantrell built their family home near Blountsville when Wanda was a young girl, and he and his wife, Diane, keep the place blooming with daylilies, jonquils, hydrangeas, and for the kitchen table, blackberries, blueberries, raspberries, and trees raining walnuts. It is not the full-scale farm my mother grew up on, but it has the same spirit. They work hard, tend the growth, and wait. Abundance comes, enough at least for Sabbath enjoyment.

And they passed onto their daughter that trust that God is doing something good despite droughts and storms. Little did they know how much good they were doing a man who could not grow a flower, much less a crop of corn, when they let her go to make her choices, ultimately choosing me.

If you think that is a happy ending to my story, you got one thing right and two wrong. Yes, it is happy — I am happy — very happy. However, it is not an ending and not even my story. It is God’s story, a story of God suffering with me, as God suffers with you, and creatively taking those sufferings, those crosses, and making resurrections in hidden places and unlikely ways. And just as my suffering and yours will cycle in and out of our lives as we die a little each day, so the story goes on of God making something good of it all anyway until God gathers us all up, wipes away every tear, and abides with us face-to-face in eternal day where death is no more.

I delivered the meditation above as a sermon at St. Peter’s Episcopal Church, Rome, Georgia, on Sunday, June 17, 2018. To listen, click here.

Our Mother, the Peacemaker
Mom Was Right
Marrying an Angel
Love Is Never Wasted