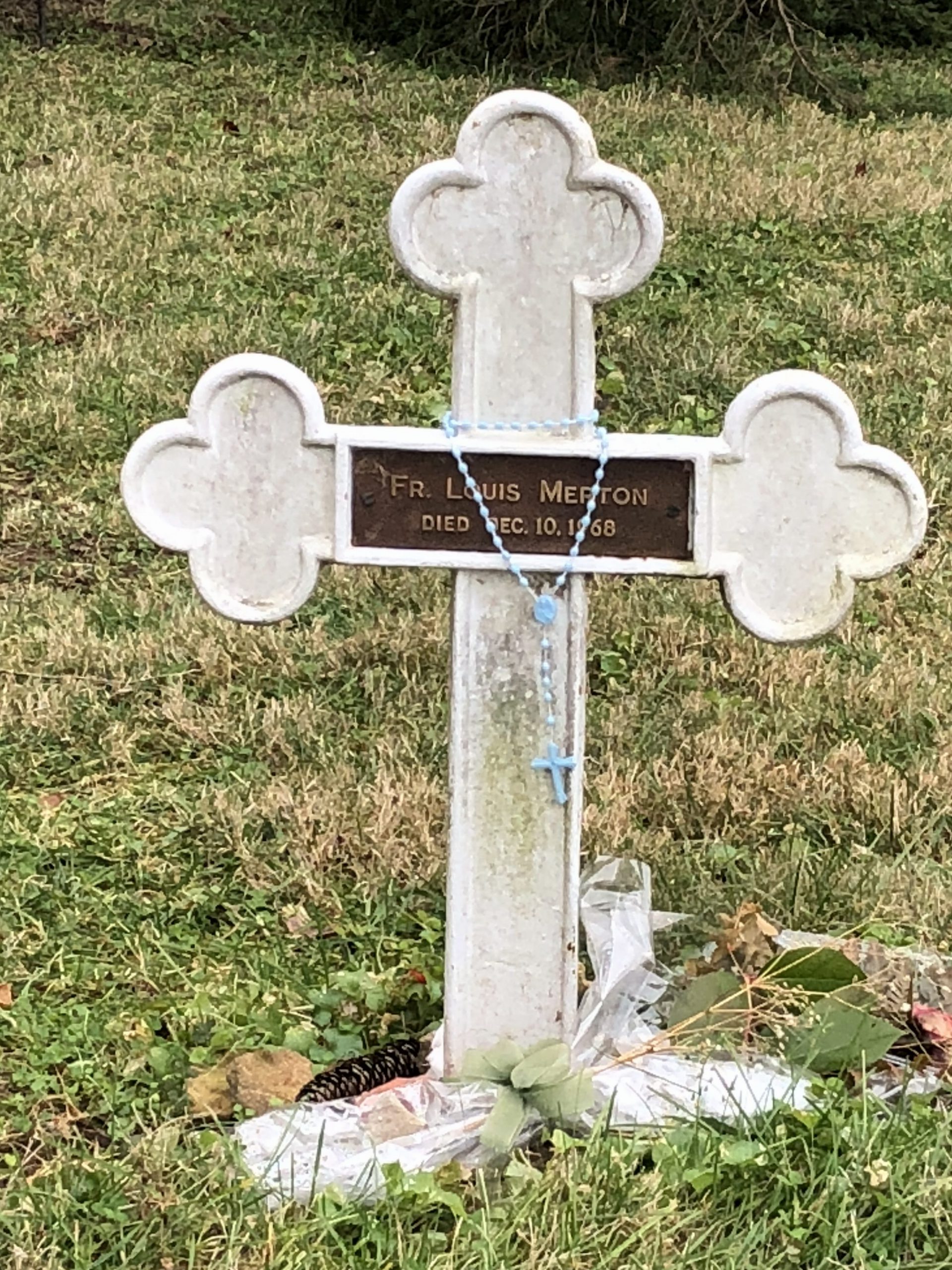 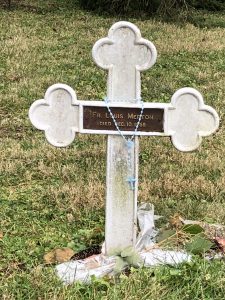 Merton’s Grave, Abbey of Gethsemani. His brothers knew him as Fr. Louis.

Beyond Pine Paradise to Merton’s Grave

Early on Black Friday, I left a backwoods mini-resort in Kentucky called Pine Paradise and headed for the least commercial destination possible: a monastery. Let me explain.

First, Pine Paradise. You have to see it to believe it: A two story log cabin lodge flanked by a caboose on one side, an enormous kitchen and dining hall on the other side, and a party barn directly across the parking lot. The grounds include a pond with a fountain and paddle boats, an outdoor hot tub, fire pit, fully equipped playground, brightly painted junk trucks and tractors, randomly placed parking meters, copper bird sculptures, an outdoor wedding chapel, windmill, covered wagons, you name it.

You will find Pine Paradise down a dirt road in Bee Spring, Kentucky where my in-laws held their annual Thanksgiving reunion. When we drove up the gravel driveway, I announced that I arrived 55 years too late. At five, I would have deemed this paradise indeed. Granted this was a great gathering place for four generations ranging in age from 3 to 76. But at 60, I started thinking about a day trip to a monastery.

I knew that about an hour and twenty minutes drive northeast, Thomas Merton’s grave was tucked amid those of his brothers at the Abbey of Gethsemani just outside of New Haven, Kentucky. This up-and-coming New York literary critic, poet, professor, and protege of Mark Van Doren, told how he landed at Gethsemani in his classic 20th century autobiography, The Seven Storey Mountain. The book takes us through his youth to his early years as a monk, and in many ways, it is a well-worn tale, echoing that of Augustine and many others: Ambitious and cocky young bohemian genius gets a sense of the futility of it all, but some inner voice keeps nagging him insistently to listen. There is meaning and purpose, even love, but not where the world tells you to look. Look closer. Listen. Within.

He entered the monastery ready to put it all aside, including his writing career. And he was a driven writer. But the abbot said, no son, writing is your calling. Here’s a typewriter.

Yet, he had to put everything else aside, every Pine Paradise, shopping mall, Columbia University class, and Greenwich Village party for his material: the landscape of the soul, the existential struggle to rest in contemplative prayer, the prophetic way to peace in the era of Vietnam and the Civil Rights movement. He understood the monk’s vocation as apart from yet fully engaged in the world. Someone had to pray full-time with a deep love for the world if there was to be any hope.

But how could such a spiritual and literary genius realize the humility necessary for such a surrendered life? Indeed, that was his greatest challenge, but he embraced it by submission to the abbot, manual labor, the liturgy of the hours, and life among brothers who identified themselves not so much as individuals but as a worshiping community. Yes, his restlessness got the best of him sometimes with a showdown or two with the abbot and even a little romance with a nurse. But obedience is not about doing it right all the time so much as it is returning from the weeds to the center, to the Shepherd when called. And he did that until his death in Thailand on December 10, 1968 in an electrical accident on a rare excursion from the monastery for interfaith dialogue.

Out here in the world, many of us still call him brother, whether we feel called to the monastic way or not. His teachings challenge us to find our true selves by losing ourselves. They challenge us to love the world with a love that issues from God, not from the masks we wear. His prayers — most notably the one that speaks for us all, simply dubbed the Merton Prayer — have given many, including me, the words to pray when life gets too confusing and numbing to know what to say. 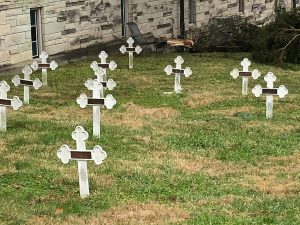 Merton’s grave among those of his brothers. While largely indistinguishable from the rest, it is the one with tokens of appreciation and a little space to walk up to it.

So on Black Friday, in a little reprieve from the sweetest people I know back at Pine Paradise, I searched the grounds until I found Merton’s grave amid those of his brothers, distinguishable only by beads, AA chips, and other tokens of gratitude left by pilgrims who came before me. I found a chair and took 20 minutes to pray silently by Merton’s grave in the manner he taught. Then after a little Christmas shopping at the monastery gift shop, I drove to a grocery store and picked up some things for the family back at Pine Paradise. And on those Kentucky roads, I traveled by myself but not alone.

Shining Like the Sun With Thomas Merton on 4th and Walnut, Louisville
The Merton Prayer
Lose Yourself to Love Yourself
Carefree Care
Authentic Prayer
Be Like a Tree, Only Free
Mirror, Mirror: The Best and Worst Time to Be Me