Shining Like the Sun with Thomas Merton on Fourth & Walnut, Louisville 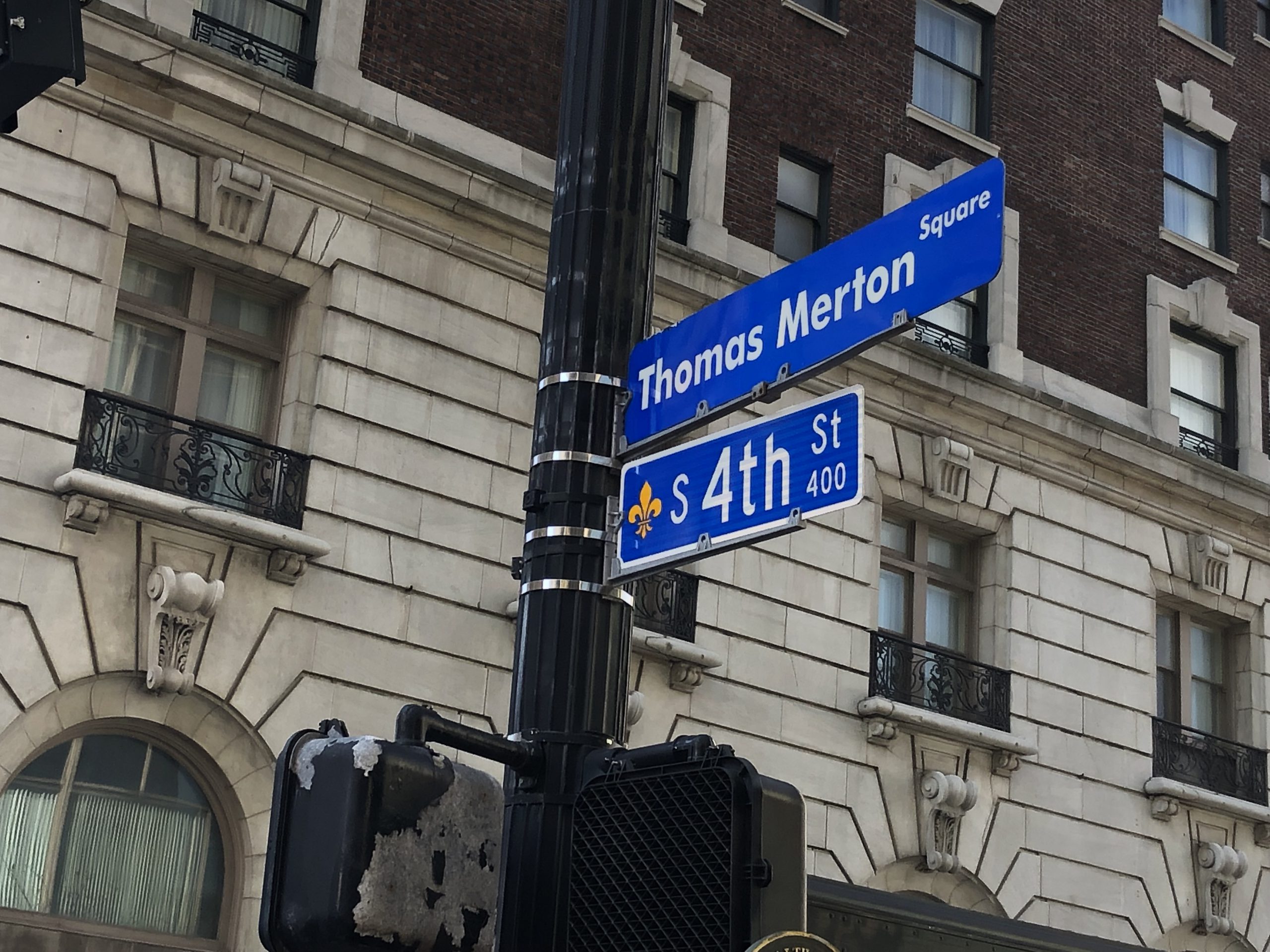 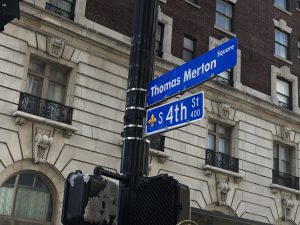 Remembering Thomas Merton Shining like the sun at Fourth and Walnut.

Recently, I attended a professional conference in Louisville a few blocks from a sacred street corner, a holy intersection. There is a pharmacy on one corner, an old hotel on another, then a bar and a glass skyscraper on the others. To get there, I walked through a square with restaurants, shops, street musicians, a painted pony statue, and towering neon letters reading FOURTH AVE. Welcome to Thomas Merton Square.

If you know Thomas Merton, the former bohemian New York literary figure who became a monk, you know how simultaneously appropriate and odd it is to name that square after him. It suggests his pre-conversion life in Greenwich Village, as told in his autobiographical masterpiece, The Seven Storey Mountain. Yet, it was a place where he experienced yet another conversion in March 1968, and his telling still inspires the city and draws pilgrims like me.

In Louisville, at the corner of Fourth and Walnut, in the center of the shopping district, I was suddenly overwhelmed with the realization that I loved all those people, that they were mine and I theirs, that we could not be alien to one another even though we were total strangers. It was like waking from a dream of separateness, of spurious self-isolation in a special world, the world of renunciation and supposed holiness…

So he reflected and wrestled further with the meaning of the monk’s separate existence and acute spiritual awareness:

We take a different attitude to….things, for we belong to God. Yet so does everybody else belong to God. We just happen to be conscious of it, and to make a profession out of this consciousness. But does that entitle us to consider ourselves different, even better, than others? The whole idea is preposterous….. This sense of liberation from an illusory difference was such a relief and such a joy that I almost laughed out loud.

Could Merton have known then that his writings raise that very consciousness in so many of us outside the monastery, who drive in traffic, work in skyscrapers, take breaks in bars, and buy medicine in the pharmacy after a long day? Could he have known what a brother he would become to us, how he would shine like the sun?

I doubt it. But in the meantime, he saw in us what we now see in him:

I have the immense joy of being a man, a member of a race in which God Himself became incarnate. As if the sorrows and stupidities of the human condition could overwhelm me, now I realize what we all are. And if only everybody could realize this! But it cannot be explained. There is no way of telling people that they are all walking around shining like the sun.

Today I stand at that corner and see students with backpacks, keyed-up drivers, a UPS driver unloading a truck, and down the street, a bus stop where three women wait. Since Merton’s time, Walnut Street was renamed Muhammad Ali Boulevard, so it is now Fourth and Muhammad Ali.

I met a man who remembered Fourth and Walnut in 1958, and he said there was a grand hotel where the drug store now stands, and about five theatres in sight and many upscale retail stores. But I know — and I am certain that Merton did too — that we encounter Christ as surely if not more so among “the least of these” (Mt 25:40), that Christ first calls “all who are weary and bearing heavy burdens” (Mt 11:28). I am confident that on the corner of Fourth and Muhammad Ali today, the beatific vision that sacralizes the streets remains possible for those who pray and love.

Then it was as if I suddenly saw the secret beauty of their hearts, the depths of their hearts where neither sin nor desire nor self-knowledge can reach, the core of their reality, the person that each is in God’s eyes. If only they could all see themselves as they really are. If only we could see each other that way all the time. There would be no more war, no more hatred, no more cruelty, no more greed…. I suppose the big problem would be that we would fall down and worship each other. But this cannot be seen, only believed and understood by a peculiar gift.

All quotations from Thomas Merton, Conjectures of a Guilty Bystander. (New York: Image, 1965, 1966), 156-158.
For commentary on Merton’s beautiful lines in the paragraph just following the ones quoted above, read my post, Diamond at the Heart of Poverty.
If you enjoyed this piece, you will enjoy, Black Friday Pilgrimage to Thomas Merton’s Grave.
Finally, if you know nothing else of Merton’s work, learn to pray The Merton Prayer.
Photograph of Thomas Merton by John Lyons. Used with permission of the Merton Legacy Trust and the Thomas Merton Center at Bellarmine University.