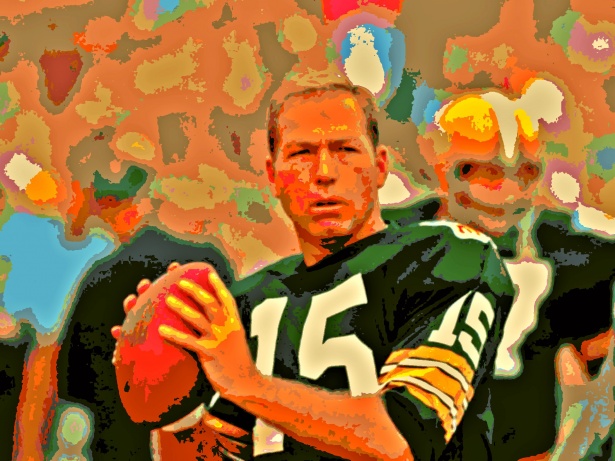 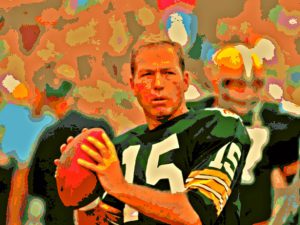 Telling My Wife About Bart Starr

On Sunday, May 26, 2019, I paused to perform my civic duty and check the news headlines. This exercise usually prompts disgust, sometimes despair. But not that day.

One headline brought a lump to my throat and a quiver to my lip. While I have no trouble with my wife seeing my cry, I really did not want her to catch me tearing up over what I read there.

Before I tell you what I read, let me offer some context. When her children played in the local high school band, we attended for their halftime performances. We usually lingered for some of the game to visit friends. One Friday night, we saw a savage tackle, and she turned to me and asked, “Why would anyone want to play that game?”

We seldom talk about football. We agree that our society places far too much emphasis on it. Young players get an overblown sense of worth and entitlement from playing. The gladiatorial violence does not entertain us, to say the least.

However, something complicates this critique for us. I played football in my youth. With a passion. And I cherish memories of camaraderie, facing fears, and rising to the occasion. Looking back, playing football helped me develop habits and perspectives that still serve me well.

So her question was personal.

But on Sunday, May 26, the suppressed boy with a passion for football cried out. The headline read, “Legendary Green Bay Packers Quarterback, Bart Starr, Dies at 85.”

She walked into the room and saw me. While I’m a bit more of a crier than her anyway, I guess there is still something alarming about seeing a grown man choked up. She sat next to me with very solicitous concern and asked what troubled me.

Not Telling My Father About Bart Starr

Another memory, this one about 15 years ago: My father loved me, but he was not long on compliments. As he reminisced about his memories of me as a child one day, he did the best he could.

He said, “Son, you were the child I always worried about ever getting anywhere, then I’ll be damned if you didn’t make it work. In the early grades, I thought you would never learn to read. Then years later you end up earning a PhD and writing books. You were painfully shy, but you ended up pretty well-liked by the time you left for college. And you were so clumsy and timid playing ball, but then you started for three years and even won awards in football. How the hell did you do that?”

I just smiled and shrugged. But now with my father gone, I wish I gave him the answer. It was Bart Starr.

An Example For Overcoming Adversity

You see, while I won awards as a pint-sized offensive guard in high school, I could never punt, pass, or kick. At nine, I learned about the NFL’s annual Punt, Pass, and Kick competition where the boys in various age categories competed for a nice trophy if they tallied the most total yards with a punt, pass, and kick.

I practiced and practiced but never reached even the middle of the pack. Yet, the Punt, Pass, and Kick program gave me free of charge the first book I felt motivated to read. It told the stories of star NFL punters, passers, and kickers. I zeroed in on the story of the passer, Bart Starr.

As I recall, Starr’s father taught him the importance of working hard and never giving up in pursuit of his goals. His early career really put that to the test. Starr led the Alabama Crimson Tide to a conference championship in his sophomore season. Yet in his senior season, a new coach benched Starr and other upperclassmen to develop younger talent. But on the strength of his prior years, the struggling Green Bay Packers selected him as their 17th draft pick — a virtual afterthought — in 1956.

Despite the setback, he never quit. In 1959, the new Packers coach, a fellow named Lombardi, made him the starting quarterback. In 1960, the once hapless Packers lost the NFL championship game to the Philadelphia Eagles, and the only playoff loss for Starr and Lombardi. Many championships ensued. By the time I read about him, they won four NFL championships and the first Super Bowl.

Nevertheless, those accomplishments do not explain why, over 50 years later, I sat on the couch explaining to Wanda with a cracking voice what this man meant to me. Obviously, as a boy, I did not get far as a punter, passer, or kicker, and I was a small but slow offensive guard. But I became a reader (much to my father’s relief). I kept reading about Bart Starr.

And everything I read emphasized his humility. There he stood quietly by the Packers’ temperamental, explosive, firebrand coach, Vince Lombardi. Starr’s quiet, dignified, modest demeanor served his teammates as the perfect motivational counterpoint to Lombardi’s histrionics as the Packers sustained winning ways for a glorious decade. 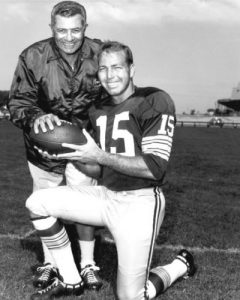 Now as I read article after article about Bart Starr, stories pour forth further confirming the impression he made on me as a boy, a humble, kind man who quietly persevered through setbacks and every challenge in pursuit of his goal.

So Dad, if you can read this up there, Bart Starr inspired me by example to press through reading difficulties, social anxiety, and having two left feet to reach my goals.

And Wanda, I know it seems absurd that your husband once loved playing that brutal sport when he cannot watch violent movies and did not like “The Little Rascals” and “The Three Stooges” as a child because there was too much meanness. But Bart Starr played that sport.

Blessed are the meek, the gentle yet strong ones who persevere in humble obedience to God even when no earthly reward seems likely. They will inherit the earth anyway. Most of them go unnoticed. Yet, a few like Bart Starr find themselves in the spotlight. I wish there were more.

If you wonder whether faith had anything to do with Starr’s humility and toughness, Starr said, “

Regardless of the successes I have experienced, if my life does not exhibit God’s love, it becomes less meaningful.”

Let me close, then, with a suggestion. Next time you sit down to do your civic duty and check the news, read about Bart Starr. You will find good news there of a life well-lived.