Moving through Prejudice to Peace 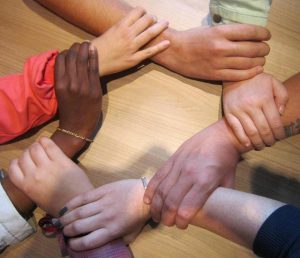 Moving Together through Prejudice to Peace

Blessed are the peacemakers, for they will be called children of God (Matthew 5:9).
Last Sunday at predominately white Westminster Presbyterian Church, we started a four Sunday series on interracial dialogue led by deacon Rick Stevenson from predominately black Thankful Baptist Church. A better understanding of the African-American experience will help us contribute less to misunderstanding and pain and more to reconciliation and peace.
He invited our stories. Many told about childhood experiences of shocked innocence upon realizing that their churches and parents did not welcome people of color. Some told touching stories of parents who affirmed their innocent openness to minority people or how a black person’s wisdom and kindness made discrimination all the more obviously absurd.
I listened gratefully to these stories and felt closer to my church. But a growing inner unease kept me quiet. For as outspoken as I can be against institutional racism and the unconscious microagressions of privilege, as much as I seethe over the insidious racism in the American way of doing politics and business, I know that I am not innocent. As much as I appreciate stories of shocked innocence, I am more concerned about the shock to my innocence when I look in the mirror and see my own prejudice.
Yes, I too can tell tales of youthful interracial friendships and appalling encounters with those too bigoted to welcome people of color. But I can tell these stories too: When apartment hunting in Charlotte soon after college graduation, I avoided predominantly black neighborhoods. When considering adoption years ago, I steered away from adopting a child of another race to avoid the social hassles. When driving to work from my house in a predominantly black neighborhood (that changed, at least) several years ago, I wondered if the black man in a hoodie walking by was the person who broke in several days before.
So there you have it. Marshall Jenkins, who loves to post about the wisdom and courage of Dr. King and of a mother who took a stand for racial understanding, struggles with prejudice. And don’t offer the moral consolation that at least I’m humble. There is nothing humble about this confession.
For I confess my prejudice with the wager that you are prejudiced too, that we are all prejudiced. If so, we will not get very far unless we confess it — white, black, red, and yellow. While we have reasons to fear each other, we must not let fear rule our relationships. We cannot, for there is nothing less Christlike than that.
Of course, some carry their prejudice proudly. Witness the large numbers willing to vote for Donald Trump. Our little town, Rome, Georgia, will host a meeting of a large Neo-Nazi organization in less than two weeks, although I know few here who approve. In the face of this evil, our prophetic witness is not to deny prejudice but to confess it, repent of it every day, and support each other in a way guided by love and not fear.