Pray For Me, Reverend: An Open Letter to Representative John Lewis 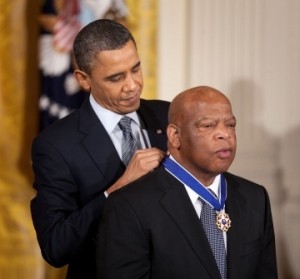 Yes, Reverend John Lewis. You are better known as Representative John Lewis, a fitting title. For although I reside in a different Georgia district than the one you represent in the U.S. House of Representatives, you represent me. You are far and away the politician in this nation whom I most respect.
But you are also Reverend John Lewis.  Although ordained, you never served as pastor of a local church. Rather, you serve a call to the mission field of America, that pagan land that clothes injustice in pious language. You bear witness to the naked truth of biblical justice in a Christendom that persecutes its prophets.

When Jesus blessed those persecuted for righteousness, he blessed witnesses. Witnesses find and offer their voices in a life of love. You live that life with your spiritual practice of nonviolent resistance for which Jesus was the prime example, Gandhi the great innovator, your friend, Rev. Martin Luther King, Jr., the great pioneer in America, and you, now, the great sustainer.
Your witness never relents. Rep. Nancy Pelosi recently said,  “Many have tried to silence John Lewis over the years. All have failed.”
Indeed, when mobs beat you and fellow freedom riders for defying unjust laws prohibiting blacks from travelling with whites on interstate highways, they did not stop you. When you and fellow marchers stopped to pray, the billy-club wielding officer who cracked your skull on the Edmund Pettus Bridge on Bloody Sunday in Selma, Alabama 50 years ago did not stop you.
And when our current, gerrymandered Republican majority in Congress tried to suppress the voice of you and others whom the people sent to speak peace to the gun lobby’s power, you led a nonviolent protest on the House floor. I have seldom been so proud to be an American.

Surely many good people have honored you and your work. For example, you received the Presidential Medal of Freedom in 2010. But now you have received a higher honor that only those who understand Jesus’ blessing of the martyrs can comprehend: You have been vilified by a president-elect who represents every evil of our culture: greed, dishonesty, fear-mongering, bigotry, sexism, victim-blaming, narcissism, and entitlement. This man born with an inheritance greater than most working people will ever dream of earning, who has no concept of social justice much less any care to learn it, who never risked a well-set red hair on his head for anything, tweeted to the world that you are “all talk.”
For consistent with your ministry, you called out his Russian supporters for polluting the democratic process, a process that should give everyone, not just the wealthy like him, a voice. Again you make me proud.
But even more, you make me humble. Pray for me, Reverend.  Pray for our nation. As you said in the interview that triggered the president-elect’s ire, “You cannot be at home with something that you believe is wrong.” Pray that we will find the voice of love God gave us and that we will do the right thing on our freedom ride home. Thank you for showing us what that looks like.

Live Your Truth
How I Will Celebrate the MLK Holiday
Witness That Nourishes, Witness That Inspires
Dr. King On Overcoming Fear With Love
Teach Me, Emmanuel AME Zion Church