National Memorial for Peace & Justice: Reflection on a Visit 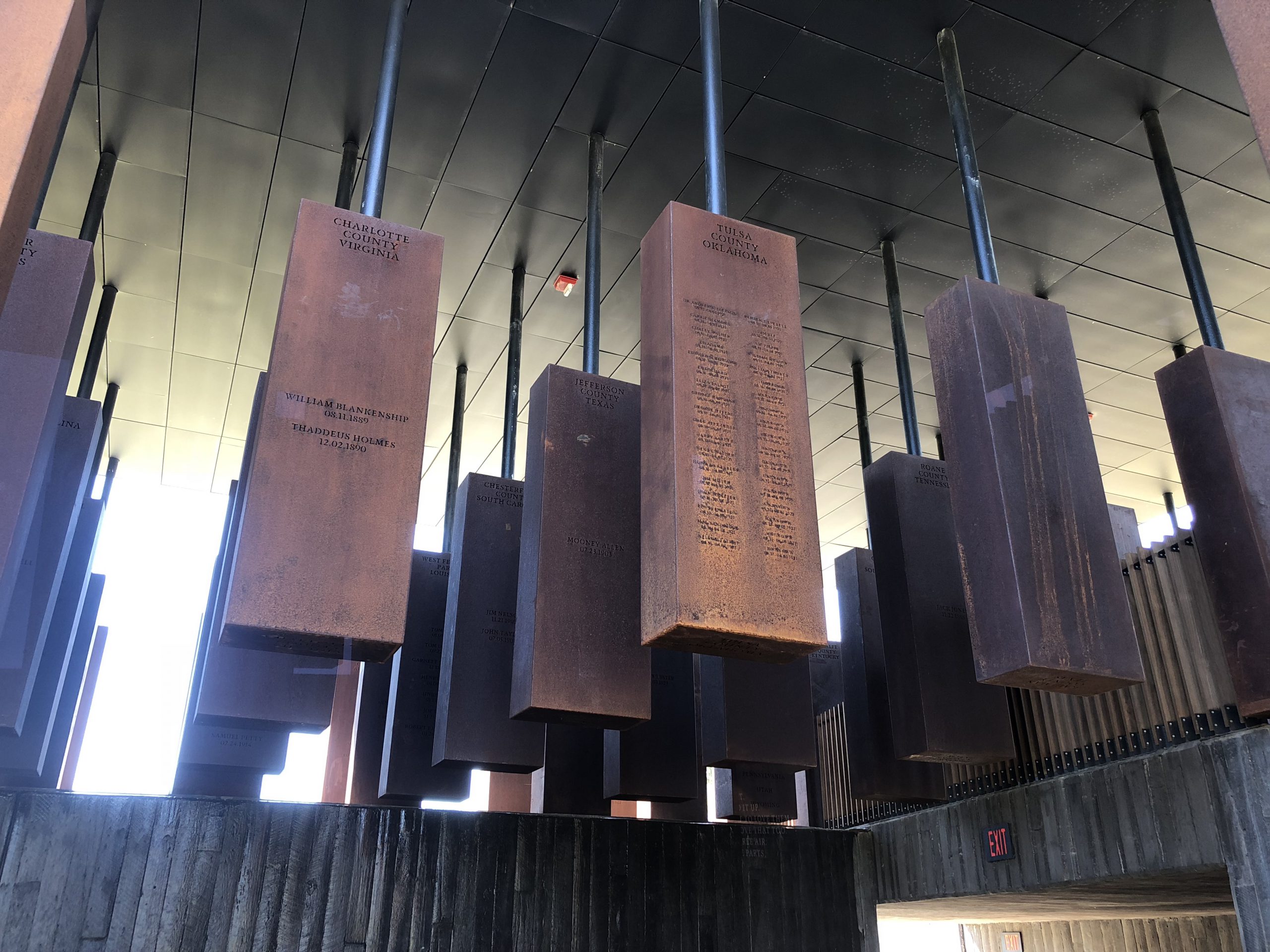 The Banality of Evil

Adolph Eichmann professed a strong sense of duty. An admirer of the philosophical genius of Immanuel Kant, he strove to live out Kant’s emphasis on doing the right thing because it is right, regardless of the consequences.

For Eichmann, this entailed executing the orders and plans of legitimate authorities. His obedience, discipline, and hard work served him well as he rose to one of the highest positions of government power.

This we learned in Hannah Arendt’s report on his 1961 trial in Jerusalem for supervising the detention and slaughter of millions in the Nazi Holocaust. Note the subtitle of her book: Eichmann in Jerusalem: A Report on the Banality of Evil.

Eichmann epitomized a mentality and way of life that was remarkable because it was so unremarkable. Not one to stand out in a crowd, he was also not mentally unstable. Six psychologists examined Eichmann and found no signs of mental illness.

He sought identity by joining up with others who offered status by association. In his time and place, what better group than the Nazis for that purpose? He did not seem to reflect much on the meaning of his life or any higher purposes. For that, he took what his milieu gave.

Arendt’s phrase for what Eichmann represented, “the banality of evil,” appalled some, for it seemed to downplay the horror. But look more closely: It means that evil is woven into the conventional mores and utilitarian routines of ordinary life. And a life lived unconsciously, just going along to get along, is the devil’s fodder.

Recently, I visited the National Memorial for Peace and Justice in Montgomery, Alabama. According to its website:

The National Memorial for Peace and Justice, which opened to the public on April 26, 2018, is the nation’s first memorial dedicated to the legacy of enslaved black people, people terrorized by lynching, African Americans humiliated by racial segregation and Jim Crow, and people of color burdened with contemporary presumptions of guilt and police violence.

I went because this memorial is a gift to my soul as a Southern, white man. For although I never witnessed or participated in a lynching, I possess the same gentlemanly manners, churchgoing habits, and need to belong as those before me who committed these atrocities. Fear, pettiness, and suspicion are part of my story if I tell it truthfully. I know how it feels to find solidarity with my group by demeaning and demonizing another. Because the odor of evil’s banality issues from me, I cannot escape it.

Would I have done better than Eichmann or my Southern forefathers? I hope so. But only God knows.

And God is merciful. God loves us despite the terrible damage we do. God forgives, but if we truly take that forgiveness to heart, we do not rest on our laurels. We look for ways to participate in the giving of that mercy that we received without merit.

I took that grateful conviction to the memorial.

The experience of the National Memorial of Peace and Justice begins with a walk up a path with sculptures depicting Negro slaves. Fence placards narrate the history of this American holocaust (and not the only one, I might add). Up a gentle hill, I enter an open-air, covered structure. Weathered, corten steel rectangular monuments face me. The first ones rest on the ground, but subsequent monuments hang from iron beams at gradually rising heights.  Each six-foot-long, rectangular cuboid records the name of a county and lists the names of African-Americans known to have been lynched there. 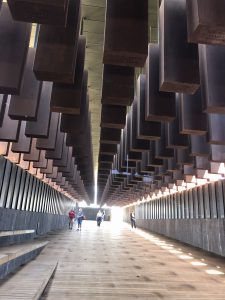 Like the Vietnam War Memorial, walking through the structure awakens me to the development of the terror from almost imperceptible beginnings. Leaving the open air, I turn a corner to descend a long dim, corridor. The monuments keep multiplying, now in many layers, my neck craning to take it all in. Eventually, I look down to read brief reports of lynchings for their reported reasons: speaking to a white woman, being the sister of a wanted man, passing a note to someone, and on and on.

Another turn takes me down a corridor flanked with a long, dark wall. Water flows over words indicating that this water commemorates the many unidentified victims. As I exit, an African-American guide tells me that my next stop is a small park with duplicates of each monument for any county to retrieve and display at home.
Eight hundred counties. Over 4400 names. And counting.

And not so long ago. Every lynching traumatized families and communities, ultimately touching everyone, black and white. Social trauma takes generations, even centuries to heal. The trauma of history is a contemporary problem.

Moving through the National Memorial for Peace and Justice reflects the sense of the ordinariness, the banality of the beginnings that lead to overwhelming evil. We have two options: Bury our heads in the sand, declaring ourselves innocent of crimes committed before we were born. Or bravely recognize our responsibility to carry forward the mercy shown to us by God and by our African-American hosts here.

They only ask us to listen. To remember their loved ones and their loss. To take care never to succumb again to the banality of evil. 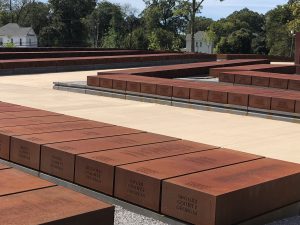 Teach Me, Emmanuel AME Zion Church
Pray for Me Reverend: An Open Letter to Representative John Lewis
Liberation Makes Winners of Everybody
Moving  Through Prejudice to Peace